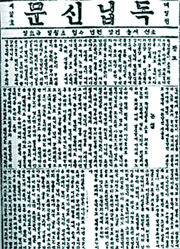 Korea was roiled by trouble at home and abroad at the start of the 20th century. Outside Korea, ambitious imperialists were expanding their territory and internally, the country was in dire need of social reform.

“One of them was publishing a newspaper,” said Chong Chin-sok, a retired professor of journalism from Hankuk University of Foreign Studies.

“A newspaper was seen as a way of enlightening and informing people about what was happening outside, pulling people together and contributing to the nation’s development,” he said.

In 1883, the government started publishing the 20-page Hansung Sunbo newspaper, written in Chinese characters. It was mainly focused on new scientific and geographic knowledge. Rather than influencing public opinion, Chong said, “The role of the Hansung Sunbo was to educate the people.”

Hansung Sunbo ceased publication in 1886 two years after the Kapsin Coup of 1884, a reformist uprising aimed at overthrowing the old regime and introducing modernization.

While the uprising was short-lived the Hansung Sunbo building was burned down during the ensuing violence.

A second paper, the Hansung Jubo, was published in 1886, but it didn’t last long. It ceased publication in 1888.

It was the start of a bumpy road in Korean newspaper history of some 120 years through the present.

For eight years, Korea was without any news publications until Dongnip Sinmun, or The Independent, was published by Seo Jae-pil in 1896.

Seo (1864-1951), also known as Philip Jaisohn, was a reform-minded medical school graduate from the United States.

The Independent was the country’s first privately published newspaper. Seo wanted the daily to enlighten the public and maintain independence from imperialist encroachment.

The foundation day of The Independent, April 7, is celebrated today as Newspaper Day.

When The Independent was published, the Joseon Dynasty was in an unstable state - the Donghak Peasant Revolution took place 1894, the first Sino-Japanese War in 1894?1895, the assassination of Queen Min in 1895 and King Gojong’s flight to the Russian Legation in 1896.

“The Independent hoped for a civilized and independent country,” Chong said. “The paper was supposed to be the people’s eyes and ears.”

The paper published up-to-date articles on health and women’s education, dealt with corruption issues and discussions on superstition.

But the newspaper was suppressed by Japan. Most issues were pre-censored or confiscated even before Japan’s annexation of the Korean Peninsula in 1910.

Other publications were also prohibited.

In 1908, about 10 private newspapers, leaflets, newsletters or other publications were banned, according to Chong’s research. This number increased to 100 the year after. 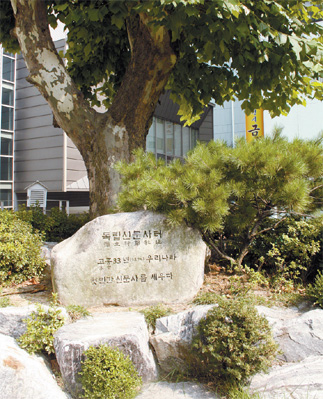 A stone memorial marks where The Independent was published during Korea’s hard times. By Lee Eun-joo

“Newspapers reflect the image of the nation and prohibition meant the nation’s spirit was blocked,” Chong said.

However, newspapers played a big role in bringing people together despite the limitations imposed by Japan.

For example, newspapers stirred people to participate in the National Debt Redemption Movement in 1907. It was one way to help the country avoid becoming economically dependent on Japan.

An editorial in the April 7, 1896 issue of The Independent read:

“It is at this moment when Korean society is in a weak state that we deem it opportune to put out this publication as an expression at least of our desire to do what can be done in a journalistic way to give Koreans a reliable account of the events that are transpiring, to give reasons for things that often seem to them unreasonable, to bring the capital and the provinces into greater harmony through a mutual understanding of each other’s needs, especially the need that each has of the other.”

But it was difficult to maintain such a role under Japanese rule since so many articles were censored.

In this context, journalist and reformist Chang Ji-yeon (1864-1921), the editor of the Hwangsung Sinmun, wrote an editorial three days after the Eulsa Treaty, which turned Korea into a protectorate of Japan, was signed in 1905.

In the article “Today I Raise a Wail of Sorrow,” Chang criticized Ito Hirobumi, the Japanese military governor, and urged that the treaty be nullified.

“Ah, alas! Ah, how vexing! My 20 million brothers, my enslaved brothers! Are you alive or dead? Should the spirit that has flowed in our blood for 4,000 years from Dangun be destroyed all at once in one fight? Alas and alas! My brothers! My brothers!” Chang wrote.

The editorial was slipped past Japanese censors and published; Chang was arrested and the paper ceased publication following his arrest. But it wasn’t the end.

He had come Korea to report on the Sino-Japanese War and founded the paper and Korea Daily News, its English edition. The Japan Chronicle, an English paper based in Japan for whom Bethell worked, also published Chang’s editorials translated from the Daehan Maeil Shinbo.

Despite these efforts, newspapers in Korea, except for one controlled by the Japanese government, were prohibited from publishing during the early 1900s, until the provisional government published its own newspaper in 1919.

Currently, there are only a few stone tablets marking the sites where newspapers were published, including the Dongnip Sinmun in Jeong-dong and Hwangsung Sinmun in Susong-dong, both in central Seoul.

Kim Soo-jeong, an official at the Seoul City Culture Department, says, “It’s difficult to locate them - there is lack of evidence [of where they were].”

Oh In-hwan, a retired Yonsei University professor of journalism, says more should be done to commemorate Korea’s early mass media and its role during the independence movement.

“The papers were a living history - We must continue research on them,” Oh said.