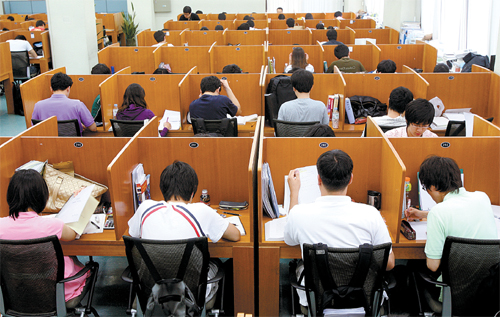 For No Byeong-hyeon, 26, sending out job resumes has become a routine. Fifty times he has tried to land a job; fifty times he has failed. A GPA of 3.6 and a Toeic score of 840 should be enough to get him somewhere, at least that’s what he thought.

No’s grades were good enough to get him a school scholarship, twice. He has also got a certificate acknowledging his proficiency in computer skills. Just to make sure, he studied and earned a proficiency certificate in written Chinese.

Although he hasn’t landed a job yet, his daily routine runs like clockwork. Getting up at 6 a.m., he eats breakfast with his family - his father, a high school teacher; his mother, a full-time housewife; and his older sister who works for the Korea Electric Power Corporation .

“A lot of my friends who seemed to be leading a hardworking life are having trouble getting a job,” said No. “This is by far the biggest hurt of our time.”

Before 7 a.m., he is already out of the house, heading for an English language institute in the Gangnam area, southern Seoul. Just before lunch he is done with his classes, but the day is far from over.

What comes next is a trip to the library at Dong Seoul College. The school lunch costs only 2,500 won ($2.40) and the library is free. There he studies till 7 in the evening. Then he heads back home.

Sometimes he realizes that he has not uttered a single word the whole day.

No was discharged from the military in 2005. Majoring in law, he has tried for the country’s bar exam but failed.

His job search started in April last year. At first, he thought getting into one or two companies would not be that hard.

Then the rejections came. By the end of May, he had been turned down by five places. 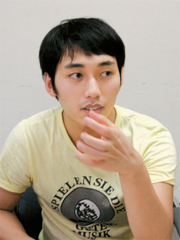 Lim Gwang-ho, a high school graduate, has trouble finding a job. "If I had more than a high school diploma, I wouldn’t be having such a hard time."

A common thought among the ranks of job seekers is that companies tend to lose interest in people who graduated more than a year ago.

Many young, jobless people blame the government for empty slogans but no real action.

In an age when the job hunt has become so competitive that it is usual to spend more than a year recruiting, officials advise potential job seekers to study the company before a job interview.

“I would advise job seekers to really think hard about how to express themselves, but there has to be the right balance. Having no personality could be a problem, but you don’t want to stick out too much either,” said Kim. 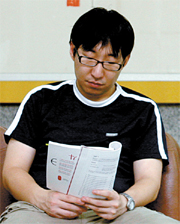 No Byeong-hyeon has sent out 50 resumes and had 50 rejections. "A lot of my friends who seemed to be leading a hardworking life are having trouble getting a job."

Companies in the retail business like GS Retail do not look at a candidate’s college reputation or English language proficiency.

A recent survey conducted by Job Korea, a job search firm, revealed that out of 1,369 people 29.2 percent cited their college credentials as the main reason they failed to get a job.

Graduates from Seoul National University, Korea University and Yonsei University, considered the top three in Korea, tend to have an advantage in the job market.

That’s why Park Eun-ho, 25, an English major at a college in South Chungcheong, tried to transfer to a college in the Seoul area. 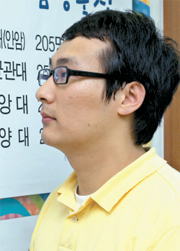 Park Eun-ho is trying to transfer to a college in Seoul to improve his chances of a job upon graduation. "Last year, I had to prepare for the transfer exam while doing my schoolwork."

After seeing a couple of friends fail to get jobs as regular workers, Park decided last year to change schools but he has already failed five times.

In March, after consulting with his mother, he decided to take a semester off to concentrate on the transfer exam. Since then, he has been hitting the books for several hours a day including the weekends.

“Last year, I had to prepare for the transfer exam while doing my schoolwork. Since I am taking a temporary absence from school now, I think my chances are better,” said Park.

At the cram institute at Daebang-dong, southwest Seoul, there are 600 students registered who are trying to switch schools.

Competition is high for universities that are perceived to give students an edge in the job hunt, especially when it comes to applying for jobs at Korea’s major companies.

Last year, for every spot available to study at Korea University’s Anam campus, there were 81.75 transfer applications.

According to job hunting firm Incruit, the average competition for 11 of the nation’s conglomerates in the first half of the year stood at 34: 1.

The government has tried to battle the unemployment rate, but a sluggish economy has dragged down the rate further. Since 2003, the government has announced plans seven times to address youth unemployment, spending a total of 4 trillion won in taxes. Nevertheless, youth employment which stood at 45.3 percent in 2005 dropped to 42.3 percent this year while the number of job seekers is increasing.

Experts say that one of the main reasons the youth unemployment rate is increasing is the mismatch in the jobs available and the desired jobs by job seekers.

“We have a lot of well-educated job seekers who keep trying until they land a job,” said Lee Byeong-hui, a researcher at the Korea Labor Institute.

The Lee Myung-bak administration has vowed to resolve the issue, announcing in April a project for grooming young global leaders able to work in a globalized world. Starting in 2009 and continuing until 2013, it plans to place 50,000 people abroad and send 30,000 people on internships and 20,000 people for volunteer work overseas.

However, such plans were devised before the price of oil surged and the credit crunch in the U.S. housing market started to affect the global economy.

Under such circumstances, people who don’t have a college diploma have problems getting a job as a regular worker even at a small-sized company.

Lim Gwang-ho, 26, graduated from a high school in Seoul in 2002 but failed to get into a university. Instead he did his mandatory military service and was discharged in 2005.

At the time, Lim’s father’s business ventures were failing and the family couldn’t afford to send Lim to college.

He tried for a year to get a job at small or medium-sized companies but without any certificates of proficiency in any relevant field and with only a high school diploma from a run-of-the-mill school, there wasn’t a single post for him at the 20 companies where he applied.

“I thought that even without a college diploma I’d be able to get some job. I was very naive,” Lim said. “There are only irregular jobs or part-time jobs available for people like me.”

He said that he has worked in computer cafes, restaurants, as a movie extra, in construction work and as a painter and decorator. “If I had more than a high school diploma to show for, I wouldn’t be having such a hard time,” said Lim, who has worked with his mother to pay back the debt accumulated by his father and is also helping with his sisters’ college tuition.

“I’ve gained experience in other areas so I have become more confident and I can do any type of work. I think a day will come when I can become a full-time worker at a small company,” Lim said.

There is some government aid available for providing people like Lim with skills and getting them jobs. The Korea Chamber of Commerce and Industry is currently operating a program that helps high school graduates pay for two years of training in 21 different fields.

Sometimes, job seekers who have a solid resume even have to go the extra mile. Some resort to plastic surgery to create a better image.

Lee Ga-hyun, 25, (assumed name) decided to have a double eyelid operation and a nose job after failing to get a job at four conglomerates.

Lee is scheduled to graduate in business from a top-ranked university in Seoul, can speak Chinese and has a Toeic score of 930.

She thought she would have no problem in landing a job and managed to get to the interview stage, but couldn’t secure a position.

“Others I had interviews with stuttered with their answers and their foreign language skills weren’t that great, but I am the one who slips every time. So I started to look at other options,” said Lee who hopes to work in public relations.

Friends told Lee that she might have been turned down because of her appearance. She went on a diet and has been seeing a dermatologist.

“There is no guarantee I will get a job even with plastic surgery, but I think I will have the confidence to try again. So no regrets there,” said Lee.