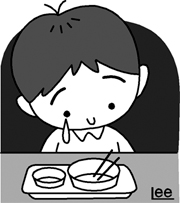 It is possible for a female wolf to have eight litters a year. When Mongolian nomads attack a breeding place of wolves, they don’t kill all the younger wolves. This is because a female wolf which loses all its offspring can become a “nanny” for its neighboring wolves that still have mothers.

The nanny wolf feeds the baby wolves with her own milk and regurgitates for them what she has eaten after hunting. Under the care of two mothers, the baby wolves grow up bigger and healthier and become more dangerous to humans. Mongolian hunters spare the lives of two baby wolves to protect humans, mindful of wolves’ habit of devotion to common welfare.

Three years ago, a controversy over the poor state of lunches for elementary school pupils arose on Jeju Island. In addition, there was an inept local government which would provide milk to last for two weeks at a time, on the grounds that delivery costs were too high.

The central government tried to fix the problem by raising the free school meal ticket to 3,000 won ($2.86). However, food prices have skyrocketed so much over the past three years that now, a meal ticket worth 3,000 won doesn’t guarantee a decent meal. In some cases three meal tickets would likely be needed for every two children.

Now, vacation is about to end. Although belated, it is somewhat fortunate.

At present, the budget for supporting schoolchildren who can’t have meals during the vacation period is around 50 billion won. There is no taxpayer who would complain about this cost. Meanwhile, as much as 108.6 billion won was paid for elections of five superintendents of educational affairs with a one-year term of office. The voter turnout was below 20 percent.

Children cannot express their pain no matter how hungry they are. We need to open our ears to hear their difficulties first, if we do not want to become inferior to wolves.