Dreaming of a musical new beginning

Dreaming of a musical new beginning 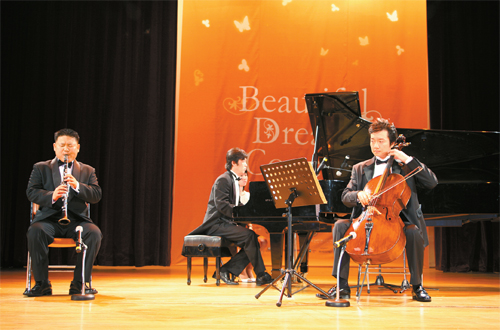 Lee Eun-bok, a 12-year-old girl who can’t see very well, read aloud a letter she wrote in braille at the start of the “Beautiful Dream Concert” last Friday afternoon at Korea University.

“Dear Eun-joo / I didn’t know I was different from others. / Since I was very young, my mom taught me to see with my heart, instead of my eyes. / But later I realized how people perceived and treated me differently. And I was hurt and saddened. / Whenever I felt that way, I sang. Because when I sang, I got courage. / Today I sing for you, hoping that you will find courage - courage to pursue your dreams in a new world.”

Some 800 people at the university auditorium held their breath as the girl clad in a colorful hanbok, a traditional Korean dress, spoke her lines.

She was writing to a girl called Kim Eun-joo who fled North Korea and settled in South Korea. Eun-joo, 22, now a senior at high school, also read out a letter she’d written for Eun-bok as part of the program of exchange for the concert. 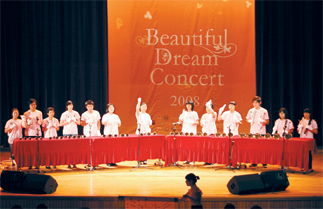 Dream Plus musicians from South and North Korea, perform at the “Beautiful Dream Concert” last Friday. Provided by the organizer

Lee was one of the singers with Hanbit Bitsori Vocal Ensemble that opened the concert, which was hosted by Citizens’ Alliance for North Korean Human Rights, among others. The children in the choir all experience some degree of visual impairment.

The aim of the concert was to raise funds for North Korean youths who have resettled in the South.

“North Korean teenagers often face prejudice, indifference and alienation after stepping foot on South Korean soil, which makes us question our society’s openness to others,” said Lee Ki-su, president of Korea University, one of the sponsors of the event.

“Through the universal language of music, we hope to break the boundaries between the South and North, the able-bodied and the disabled, and help our children hope and dream again,” the president said.

Kim Hak-min, a senior program official with the alliance, said the organizers of concert, first held last year, want to help settlers from North Korea adjust to schools and society in the South.

The number of North Korean defectors to the South passed 10,000 last year and is estimated at 13,000 at present, according to the Ministry of Unification. That number will reach 20,000 in 2010 at the current rate.

North Korean teenagers account for an increasing portion of the defectors heading to the South. According to the Ministry of Education, Science and Technology, there were 602 North Korean youths attending regular elementary, middle and high schools in South Korea in April last year. The figure is up from 444 the same month in 2006.

But difficulties adjusting to the new curriculum and studying within a new peer group force many North Korean students to quit regular schools and opt for alternative institutions, even though the diplomas there might not be recognized by the education ministry. Others just take low-paying or temporary jobs.

“I thought once I came to South Korea, I’d somehow find a means to make a living,” said Kim Cheong-woong, a pianist who fled to South Korea in 2003.

He teamed up with cellist Bai Il-hwan and saxophonist Lee Sang-jae, both from the South, to perform at the concert.

“Instead, it turned out to be the beginning of another kind of hardship. But you should never lose sight of your dreams, especially young North Korean defectors. They must realize their dreams more than anybody else because they made a very difficult choice to get here.”

Kim’s Dream Trio played the Forrest Gump Suite by Alan Silvestri as video clips of the movie were shown.

“It was a most appropriate piece,” said Bai, a professor at the music school of Ewha Womans University. “Just like what the movie was telling us, there is no such thing as a worthless person or dream.”

The highlight of the concert was a handbell performance by Dream Plus, 13 youngsters from the North and the South who devoted five weeks to rigorous practice. Several of the girls in the group from the South have learning difficulties.

Moon Chun-sang, a program officer at the Asia Foundation attending the concert, said people in the South were not overly concerned about North Korean youth issues. “But events like this make people curious,” he said.

“If we remove a tree from its original soil and replant it elsewhere, it struggles to adjust to the new climate and surrounding,” said Kim Suk-woo, president of the National Development Institute, also attending. “I was very touched today, realizing how it is our responsibility to help North Korean children who have risked their lives to come to the South for a new hope.”