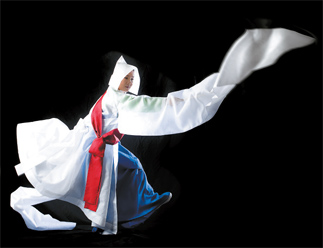 Get ready to whirl.

“The best folk dancers of our generation will take the stage under the direction of art director Jin Ok-seob,” said the president of the Korea Cultural Heritage Foundation, Kim Hong-ryeol.

Korean folk dance has such a strict tradition that performers of different genres are not allowed to dance together under the same billing. Folk dancers often train under one teacher for most of their life and perform with those within their close circle.

This tradition makes “Palmujeon” a special show involving the most diverse of each folk dance category.

Palmujeon is a great opportunity for fans of the genre as well as those who have never seen folk dance. The basic repertoire will feature seungmu (dance in Buddhist attire), salpuli chum (scarf dance) and taepyeongmu (featuring exquisite hand and foot movements).

Other genres such as gyobang chum, han-ryangmu (a Joseon-era dance), buk chum (large drum dance) and chaesangsogo chum (during which the dancer carries a small drum and performs spectacular movements, including head spins) have been added.

Twelve musicians will provide the sounds and rhythms of the performance. “Music is everything to dance, dancing is merely the act of music passing through the body,” said Jin Ok-seob, the art director.

The organizers of the show chose KOUS because it’s a relatively small venue with 240 seats. Forty “Mania” seats have also been added to the front row, allowing visitors to experience the show as it was meant to be enjoyed, cross-legged on floor cushions.

These seats play an important role in creating the right atmosphere, encouraging the dancers to improvise new routines.