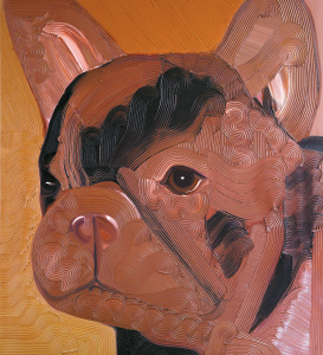 Chinese artist Yin Qi was struck by the differences between Paris and his home country when he arrived in the French capital in 1989.

He had never seen such a capitalistic urban sprawl and he found the city to be too tense, too strongly defined and stereotyped.

Ever since, Yin’s art has retreated from such realism and veered toward the abstract and the surreal.

“Reality progresses rapidly but in Yin’s paintings there is a sense of stillness and disassociation from conventional time,” said Jung Ji-young, the curator of Hakgojae Gallery in Jongno, downtown Seoul.

The gallery is currently showing an exhibition of Yin’s solo work comprising some 70 landscape and oil paintings and paper collages. The display runs until next Wednesday.

“Yin’s work helps us escape from competitive and chaotic reality,” Jung added. “He offers an unconventional view of objects.”

For example, the ocean in Yin’s “Sea” (2006) is no longer blue or clear, but much darker and more dreamy.

“Yin is sarcastic about capitalist society where reality is often boasted or exaggerated,” Jung said.

Another example of Yin’s work is his thick brush paintings of dogs, which he worked on from 1999 to 2002. The faces of dogs look unrealistic, according to Jung. “It’s Yin’s way of breaking away from the stereotypical images of dogs.”