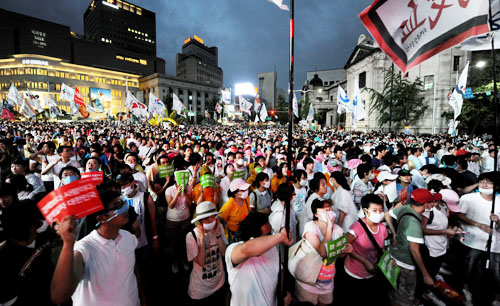 We no longer actually see any candlelight at recent candlelight vigils. The 100th rally at Seoul City Plaza. [NEWSIS]

They say the so-called candlelight vigils have been held over 100 times. If they have no intention of trying to set a world record in time for the Beijing Olympic Games, it must be about time for the organizers to give up the vigils and go home. It is remarkable that they have continued to hold protest rallies while keeping tabs on the number. The reason why I add “so-called” before “candlelight vigils” is because we no longer actually see candlelight at recent rallies.

Despite the efforts of those who try hard to carry on with the protest rallies, it is rare to find ordinary citizens’ participation in them anymore. It has been a long time since talk of mad cow disease, which triggered the candlelight vigils in the first place, disappeared into thin air. The only thing left is the practice of staging protests in opposition to the government.

The reason why they protest has become unclear. It is only a blind belief that they should stage protest rallies unconditionally. The personal backgrounds of those arrested by the police for violence and use of extreme means of protest show us just how the nature of the rallies has changed. Most of them are homeless and unemployed people or ex-convicts. In other words, they are people who are bound to be dissatisfied with society.

The candlelight vigils have now become a place for these people to vent about their dissatisfaction and discontent. It is amazing that the so-called progressives and those who are dissatisfied with social conditions can hold hands like this.

The reason why I raise the issue of candlelight vigils, which have almost died down now, is because I seriously wonder whether Korea is capable of thinking rationally or making reasonable decisions in the future. Public concern over the safety of U.S. beef due to the mad cow disease scare was resolved at an early stage. Scientific study has revealed that there was hardly any risk of a mad cow disease outbreak in the United States. Above all, consumer reaction to U.S. beef on the market, with the resumption of imports, proved that the concerns over mad cow disease were nothing but baseless anxiety.

So, let’s look back on what happened in the recent past with cool heads this time.

Let us inquire whether the controversy over mad cow disease that shook the entire country for four months was based on a rational way of thinking or reasonable judgment.

Let us also inquire into the assertion that people who eat imported U.S. beef will end up with “small holes in their brain” and will succumb to death eventually, to see whether this is scientific and rational thinking.

Let us judge whether the one in 4.5 billion chance of catching mad cow disease justifies our earlier fears.

Let us also calculate what it would cost to lower that possibility to zero. Or rather, let us figure out to what extent we could reduce the levels of danger in everyday life that threaten the lives of our children if we spent that amount of money on other hazards.

It may be troublesome to contemplate, but there is no guarantee that a situation similar to that created by the U.S. beef import scare will not repeat itself, if we don’t take the time to reflect on it.

Groundless rumors that sounded more like imaginative ghost stories and inflammatory slogans took the place of rationality and reason.

Generally, people have a tendency to think in a rational and reasonable way when it comes to things directly related to their own interest. They make up their minds after thoroughly evaluating the costs and benefits. However, when they go beyond that and move into social issues, they suddenly change their attitudes and take irrational and unreasonable actions. Even people who are normally quite rational ignore scientific evidence or logical reasoning and hopelessly kneel before outrageous exaggerations and intentional distortions. This is the reason why it is necessary for Korean society as a group to review the course of events in the beef issue.

However, you cannot always be rational and reasonable in life. At times, you choose to make a decision, even though you know it is not going to be beneficial to you. But this does not lessen the importance of rationality and reason. Even if you choose to take a loss, there is a clear difference between the risk you take while knowing the reason and accepting the cost, and the other risk you take without knowing what you are risking. Recklessly irrational and unreasonable actions cannot be sustained for long, because the consequences of improper judgment and decisions are too great. The beef situation proves this.

Ryu Geun-chul, a professor at Moscow State University, who generously contributed 57.8 billion won ($55 million) to the Korea Advanced Institute of Science and Technology recently, may look like he made an irrational and unreasonable decision at first glance. Financially, it may look irrational and unreasonable to donate such a large amount of money without receiving anything in return. However, a much larger rationality and reason must have worked in the heart of Prof. Rhyu. It may be a financial loss, but he values the accomplishments and sense of satisfaction the contribution will bring to our society in the future very highly. No decision could be more rational or reasonable than the one he has made.

A cash cow for a century