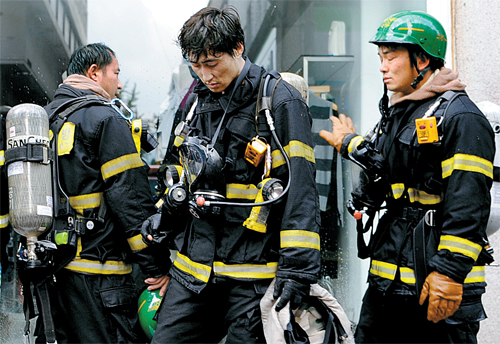 Firefighters weep after their three colleagues died yesterday while fighting to extinguish a fire at a nightclub in Eunpyeong District, Seoul. The building’s roof collapsed while the fallen firefighters were inside. [NEWSIS]

The Seoul Metropolitan Fire and Disaster Management Department said yesterday that Cho Gi-hyeon, 45; Kim Gyu-jae, 41; and Byun Jae-wu, 35, were trapped by the sudden collapse of the roof on the third floor of the burning building in Daejo-dong, Eunpyeong District.

Officials said the three firemen, who suffered severe smoke inhalation, were immediately rushed to Yonsei University’s Severance Hospital in central Seoul by fellow firefighters, where they were all later pronounced dead.

Fire department officials said that the fallen firefighters led the charge into the three-story building.

Cho was an 18-year-veteran, and Kim had been with the force for about 16 years, while Byun was a second-year firefighter. They were assigned to the Nokbeon 119 Center of the Eunpyeong Fire Station.

According to fire officials, 75 firefighters and two policemen were called to the fire at around 5:20 a.m. All told, 29 fire engines fought the blaze, which was brought under control around 6:50 a.m. Though the building was badly damaged, there were no civilian injuries. The fire broke out after hours.

The building was constructed in 1992. The second and third floors of the building have been used as a nightclub since July 1999.

The cause of the fire was undetermined as of yesterday.

The tragedy is an unexpected replay of one in 2001.

Following the deaths early yesterday, the firefighters’ families were grief stricken. They cried bitterly at a mourning area in Yonsei Severance Hospital.

The 67-year-old mother of Byun, Choi Mae-ja, said she was at a loss for words. She had trouble keeping her balance. Byun was her closest loved one, as she had recently lost her husband and daughter.

A fellow firefighter at the Dongdaemun Fire Station, Cho Min-wu, the older brother of the deceased firefighter Cho, expressed his sorrow over his younger brother’s death.

Other people also shared their sense of bereavement through the Internet, leaving online messages on bulletin boards.

One said: “The three firefighters are real heroes.

Another said: “I pray for the souls of the dead.”