Far from the madding crowd

Far from the madding crowd 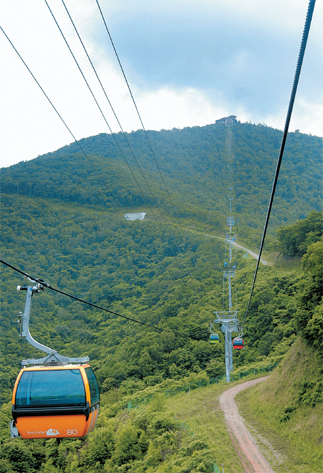 YONGPYEONG - The shrubs are a resilient green, creating a view of lush summer forest. The mountains rise softly, like gravestones composed from afar. The view seems unworldly.

My companion and I are tucked inside a gondola lift. We have just passed a sign telling us we’re 850 meters (2,788 feet) above sea level, yet it’s only been a few minutes since we left the base terminal of Mount Balwang, rising 1,458 meters above the ground in Yongpyeong Resort, Asia’s largest ski resort, in Pyeongchang County, Gangwon.

Suddenly, a morning breeze wafts through the gap of our open window; my companion sighs deeply.

A minute after the gondola’s departure, scenic forest unscrolls beneath us like an ink painting. The slopes are starkly steep, reminding us that we are passing over the resort’s most difficult course. 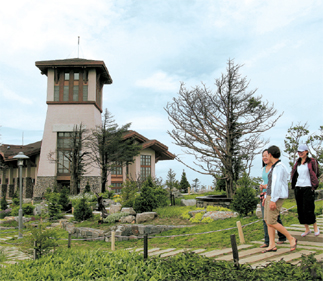 A garden and a teahouse on top of Dragon Peak in Yongpyeong Resort. [JoongAng Ilbo]

In the winter, these slopes are packed with skiers and snowboarders from all around the world. After all, Pyeongchang gets the most snow on the peninsula; the wind from the East Sea clashes with the prevailing westerlies and forms clouds. An average of one meter of snow falls in the region through early March every year.

But ever since the county lost its bid to host the 2014 Winter Olympic Games to Russia last year - despite months of government lobbying and overwhelming public support - Pyeongchang seems to have lost its previous vibrancy.

A year after the bad news was announced at the International Olympic Committee’s general assembly meeting, banners that once welcomed IOC inspectors on almost every street corner now carry messages of blame, accusing government authorities of a lack of preparation for the meeting. 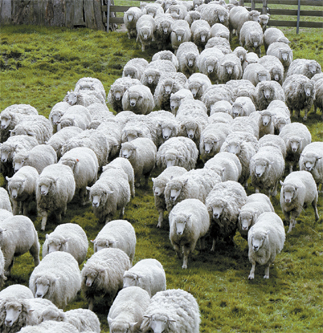 Yet in the midst of the loud dispute, many fail to realize that these ski slopes are real mountains, and that their assets could be used for purposes other than winter sports during the rest of the year.

A gondola takes 18 minutes to reach the peak of Balwang and the views are imposing.

Few trekkers know about the trails here. The resort gives visitors the choice of three. The Golden Trail, which starts from Birch Hill, is the longest trekking course, ending at Dragon Peak, Mount Balwang’s highest point.

The Silver Trail starts at the entrance of Verde Hill, also ending at Dragon Peak. 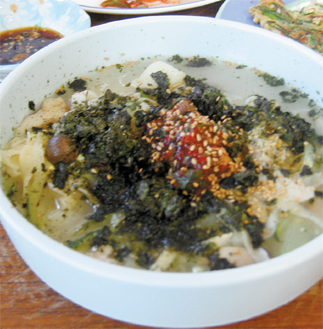 A traditional noodle dish, kalguksu, at One Sikdang, a humble restaurant next to Hoenggye Bus Terminal. Photo by Park Soo-mee

Enveloped in fading mist, the peak has a pleasant garden which looks down on a panoramic view of the surrounding mountains.

For amateur trekkers, the resort also suggests a forest walkway which passes a cozy spring and a path lined on both sides with towers made of hand-piled stones.

The trail is blissful. Shortly after the entrance, a sign encourages you to take your shoes off; the idea is to get an invigorating foot massage as you walk. 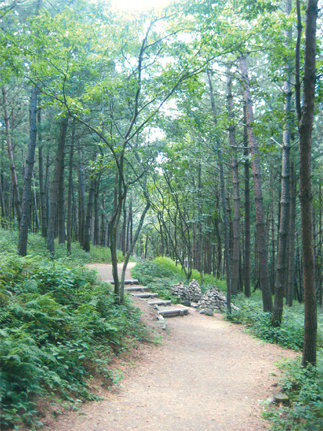 Indeed, it’s a perfectly safe and pleasant trail to walk barefoot. Further down, you can wash your feet in the spring, at a site where slash-and-burn farmers used to grow corn and potatoes decades ago.

Koreans call trails like these “forest bathing houses.” They believe that breathing in the natural air in the forest is a remedy for exhaustion, much like having a long soak in a hot bath.

If all this is too much of a hassle, lazy travelers can exercise the option of taking a leisurely gondola ride.

But summer in Yongpyeong has other delights in store for curious funseekers, too.

In addition to an annual music festival, the Great Mountains Music Festival and School, which takes place every August and ends today this year, there are unique attractions like a spanking new water park and an outdoor snack joint on the bottom of a ski slope, which is open through midnight.

One of the region’s major attractions is two sheep farms near the resort.

Samyang Ranch is a sprawling countryside estate surrounded by Mount Hwangbyeong, a popular backdrop for Korean movies and television dramas.

The other, Daegwallyeong Sheep Farm, is only about one-tenth the size of Samyang.

The difference in size says it all. Samyang is a corporate ranch with over 600 dairy cows producing over 270 tons of milk a day. Sheep are a side livestock here.

Daegwallyeong’s main purpose is as a tourist farm, concentrating on sheep. The size of the ranch is much more intimate; it takes roughly 40 minutes to walk a full circuit.

Yet on a sentimental level, Dae-gwallyeong evokes an experience that’s more harmonious and personal. The sheep are chubbier, look more peaceful and are not afraid of human contact. Even as kids approach the fence and reach out to pat the sheep, they don’t look disturbed; they just continue grazing or dozing under a tree.

In some ways, this seems to encapsulate the spirit of the town. Koreans often describe Gangwon as being tranquil and relaxed. This is not entirely a myth.

During my visit, I dined at a small noodle joint next to a bus terminal in Hoenggye, a small town from which you catch your transit bus to the resort.

Shortly after the peak lunch hour, a group of male workers swarmed into the restaurant and ordered noodles.

The restaurant owner, seemingly unmoved by her boisterous clientele, announced that she would serve vegetable pancakes instead, because they had come in just as she was about to take a nap.

Delicacies here vary from mountain herbs to vegetables like local potatoes. Yongpyeong’s hanwoo, or Korean beef, is also known as the finest of the country’s finest.

You don’t have to hang around outside the meat alleys near the resort for long before you spot the vans of Korean celebrities from Seoul pulling up in the restaurants’ parking lots.

The meat is tender and flavorful, but frankly not as spectacular as the locals claim.

Still, a summer excursion to Yongpyeong is well worth the trip. It’s peaceful, laid-back and the perfect way to avoid the winter hassle of driving through snow.

Yongpyeong Resort (033-335-5757) is located in Pyeongchang County, Gangwon Province. Buses from Seoul to the resort leave daily from Sadang Station, Apgujeong and Jamsil. Check with the resort for exact times. There is also an express bus from East Seoul Bus Terminal to Hoenggye that takes about three hours.

To get to Daegwallyeong Sheep Farm (033-335-1966) by public transport, grab a taxi from Hoenggye Bus Terminal. The ride takes about eight minutes. Admission is 3,000 won ($3) including a chance to feed the sheep on the farm.

One of the most popular beef restaurants in the area is Yongpyong Hoegwan (033-335-5217). Most customers are from Seoul. Prices start from 25,000 won. One Sikdang (033-335-5625), next to Hoenggye Bus Terminal, is a humble noodle joint, which offers classic homemade Korean food.

On Yongpyeong Resort, you can also rent bicycles, take a one-day golfing course or ride a gondola up to the peak at the resort. Peak Island, a new water park that’s just opened within the resort compound, has spas and swimming pools. Admission for adults until Sunday ranges from 36,000 won through 60,000 won depending on the time of day.