Unwashed, hungry and alcoholic - suffering for your art

Unwashed, hungry and alcoholic - suffering for your art 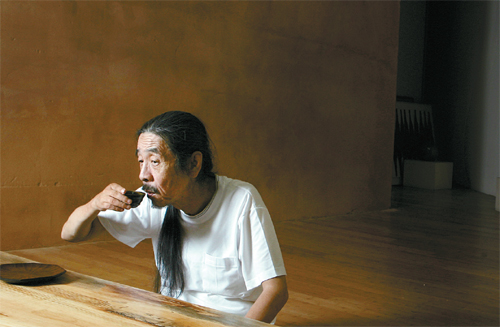 The novelist Lee Oi-soo in the house built for him by the local government in Gamsung Village, Gangwon. By Jeong Chi-ho

Novelist Lee Oi-soo, 62, is as eccentric as they come.

Ever since he published his first short story, “Apprenticeship,” in the Kangwon Ilbo in 1972, Lee has been questioning authority and our ideas about life and art.

On a severe winter day, Lee found himself a secluded place in the mountains absorbed in writing. For every meal, he cooked rice and put it outside in the cold to freeze.

“It was pathetically cold,” Lee said, brushing back his long gray hair. 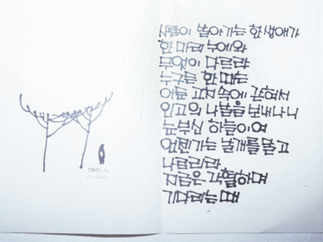 A poem by Lee that compares life to a silkworm.

“I munched rice using a hammer and nail instead of a spoon,” he said. “The chill seemed to clarify my soul.”

He didn’t bathe for four years. He thought washing would take away his soul.

The year Lee got married, 1976, he was diagnosed as an alcoholic. When he started drinking, he could binge for three days nonstop. 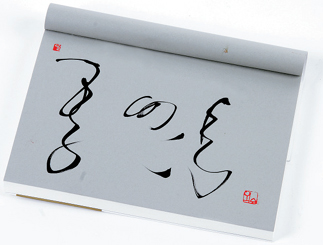 “The morning after being drunk, I found myself waking up inside a doghouse or trash can,” he said. And there were liquor bottles everywhere. He also lost weight - from 45 kilograms (99 pounds) to 38 kilograms - and his hands would shake.

Recovering from the addiction was painful but Lee says every emotion helped his writing become more descriptive.

“It allowed me to build up my moral strength - besides, there’s no gain without pain,” he said.

This pain grew into his first full-length novel, “The Dreaming Plant,” in 1978. The book left him in anguish. The editor of the publishing company ran away after signing the contract, leaving him with no royalties. 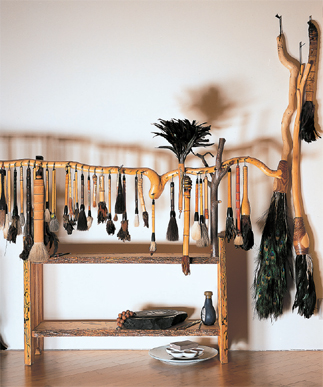 The paintbrushes that Lee uses to write poems and draw calligraphy. [JoongAng Ilbo]

As you might expect, the characters in Lee’s tales are mostly full of despair. His later stories turn away from realism and start to depict a kind of utopian world, like in “The Person Off-board” (2005).

He’s written some 20 books over his 30-year career.

“Nourishment can either decay or ferment over time,” Lee said. “And the same can be applied to human souls. As people age, their souls either corrupt or grow in wisdom.”

Lee proudly says the arts are the best way of keeping souls healthy.

“Art is life’s preservative,” he said. Besides writing, he paints and acts. 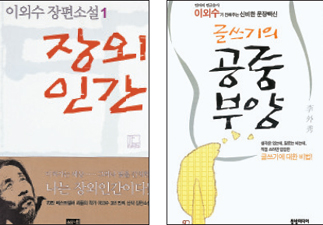 According to a recent survey on reading habits conducted by the Korean Publishing Foundation and the Ministry of Culture, Sports and Tourism, Koreans read an average of one book a month. Four out of 10 adults don’t read books at all.

In addition, research from the Korea National Statistical Office carried out in 2007 shows that the average Korean reads 10 books a year. Three years ago, it was 14.

No wonder Lee believes writers are facing a crisis.

People often say artists should go hungry to produce good art, including writing, but Lee disagrees. “That’s an old saying. All beggars aren’t artists,” he said, saying that a writer needs a decent environment and support more than anything else.

That’s why Lee is appearing more often to the public these days to express the poor conditions that artists in general face in their work.

He regularly updates his personal blog (www.oisoo.co.kr) and appears on entertainment talk shows, commercials and an MBC sitcom called “The Secrets of Keu Keu Island,” which airs every weekday at 7:45 p.m.

There are worries, however, regarding his current level of publicity, and his fans say he is in danger of losing the truthfulness of his writing.

Lee counters, saying that “farmers can sometimes work outside their farms and that breaking the rules isn’t always bad.”

Plus, he earned more money appearing five times on the sitcom than he has in his 30-year writing career.

“How ironic and sad,” he said. “The money I earn will be given back to the public with my writing.”

Needless to say, his primary motivating objective is to promote the arts.

In response to his increasing popularity as a writer, officials from Hwacheon, Gangwon, have built a house for Lee in Gamsung Village. Gamsung in Korean means sensibility.

Forty percent of the 7 billion won village has already been completed.

“Promoting Lee will help boost the regional economy,” said Kim Sang-rim, an official at Hwacheon County. “The literary village will have a reading center, exhibition halls and outdoor stages.”

It’s the first time that a regional government has built a home for a living writer.

At his new home, Lee is currently teaching writing to 61 students every day.

“Anyone can come by this village and earn sensibility,” the writer said.

Part of the message that Lee imparts to his students is that the arts should pursue beauty, which creates love.

“Unlike technology, arts should be creative and not imitated,” he said. “Naturally, an appreciation of the arts doesn’t come easily.”

But today, there are many “pseudo-artists” and self-proclaimed artists who treat the arts with a lack of respect, Lee said.

“No one can become a novelist overnight,” Lee said. “Becoming one isn’t like acquiring a driver’s license.”

A writer should experience pain and suffering to write well, he said.

The trend these days, according to the novelist, is to write superficially on blogs and Web sites.

“People write for authority and reputation,” he said, wrinkling his brow.

When President Lee Myung-bak and his then-transition team announced earlier this year that high school classes would be taught in English by 2010, Lee was outraged.

“How can you teach Korean history and language in English?” he questioned.

The novelist strongly suggests reviving Hangul Day, which used to fall on Oct. 9, as an official holiday.

Hangul Day was dropped as a holiday in 1991. The official reason was there were already too many holidays in October: Chuseok, Foundation Day and Armed Forces Day.

“Korea seems to neglect the fact that Hangul is considered part of the world’s cultural heritage,” Lee said.

Lee celebrates Hangul Day alone at home. Gradually, he hopes to share the day’s celebrations with others around him, especially the youth.

“I want to build a school that provides sensitivity training,” he said, noting that life shouldn’t be governed only by the brain but also by the heart.

“Just because you breathe doesn’t mean you’re alive. You need energy in your heart.”

He encourages youngsters to look for their own sufferings.

“There is no such thing as a painless birth,” he said. “Find pain in life - it gives roots to wisdom.”