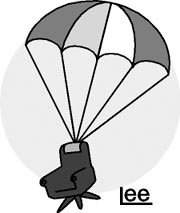 A parachute is known to have been used by the Chinese for the first time in 1306. Renaissance man Leonardo da Vinci was also quite interested in the principles of parachuting. He mapped out the structure of a parachute in 1485. Da Vinci’s parachute plan became real when a Swiss man put it into practice 500 years later. He succeeded in using a parachute designed according to Da Vinci’s plan.

Parachutes began being used for practical purposes for the first time in 1802 in France. A. J. Garnerin jumped from 1,000 meters with a parachute and successfully landed. When imprisoned for being a revolutionary guard, he dreamt of escaping from prison and mapped out a parachute. After leaving prison, he made the dream reality. Since then, parachutes have been used as safety equipment and as leisure sports equipment. It was during World War II that parachutes began to be used mainly for military purposes. Soldiers who landed using parachutes played a major role in Germany’s attack on Island of Crete, and at the beginning of the Allied Forces’ landing in Normandy.

More recently, we use the expression “parachute appointments” to refer to those in power placing close associates in key positions. In France “parachutage” refers to the close-knit society of the power elite. It is used when a person graduates from the National School of Administration or the Polytech, becomes a high government official and then becomes a CEO of a private firm.

In Japan, there is “Amakudari,” meaning that someone came from heaven. In the United States, there are revolving door personnel appointments. This refers to politicians who go back and forth between private firms and public posts.

Political circles are discordant with “parachute appointments” these days. The government has dismissed KBS President Jung Yun-joo in an attempt to get rid of someone parachuted in by the previous government. The candidate who was likely to become the next KBS president gave up his bid, cancelling out another possible dispute over parachute personnel. However, the suspicion of parachute personnel is not likely to subside. The Blue House has said that it will mention a person as a likely candidate even before the Board of Directors opens and that it would conclude the appointment of the KBS president by the end of the month. This amounts to the Blue House acknowledging that the Board is only secondary. Korean society has pondered the meaning of democracy since it became democratic, but it has degraded itself to the point that we are concerned that democracy is being damaged. Where did we go wrong?