Heart and harmony in the hills

Heart and harmony in the hills 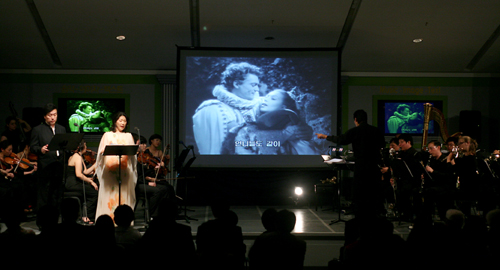 Distinguished Artists Performance on Aug. 17 at the Great Mountains Music Festival & School, featuring host ensemble Sejong, among others. Provided by the organizer

YONGPYEONG - “Don’t use your brain. Use your heart. Don’t think too much and just feel the harmony.”

In impassioned yet affectionate tones, Slovenian violinist Igor Ozim handed down this sage advice to Kelly Talim, a student at Cedar Park Middle School, after she played a Bach piece on her violin.

And from their seats, the entire audience hung on closely to this exchange.

It is a violin master class at the Great Mountains Music Festival and School. Classical music teachers, students, or simply fans are in Yongpyeong, Gangwon, for three weeks of concerts, classes and just fun. 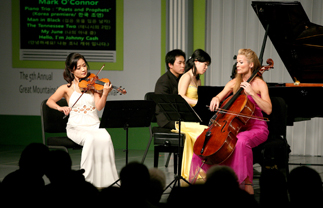 “Did you think of this as a melody or harmony?” Ozim shoots the question at Talim.

“When you play Bach, you must think in harmony. Think of the notes as just ornaments that connect the movement, and make it interesting in-between the chords.” Ozim takes out his violin and demonstrates what he means.

Every summer since 2004, the sounds of violins, violas, cellos, ensembles and orchestras have filled the air at Yongpyong Resort, a picturesque retreat at 700 meters (2,296 feet) above sea level. If visitors are lucky, they might even spot famous faces on the Korean classical scene like cellist Chung Myung-wha, who taught a cello master class this year.

“The quality of the students and the music is amazing,” Chung said. “As a teacher, it’s such a wonderful experience.”

About 160 students from nine countries including the United States, Austria and Columbia attended this year’s music school.

This year’s festival kicked off with a new, ambitious theme of blending different forms of art, music, image and text. An outstanding example was the performance “Eh Joe,” which adopted music by noted Korean-American composer Earl Kim (1920-1988) and images by Irish dramatist Samuel Beckett (1906-1989).

Reactions to those bold, experimental performances vary, especially among classical novices. But one thing is for certain: There aren’t many musical events in Korea where people can meet so many veteran and rising classical stars at once.

And for the musicians, it’s a rare chance to play with and learn from each other, all against a scenic mountain backdrop.