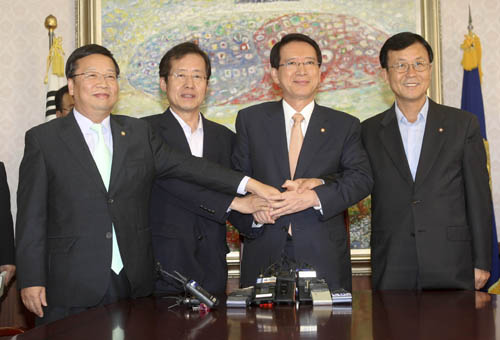 The former president of Taiwan, Chen Shui-bian, is in dire straits. His wife, son, daughter-in-law and brother-in-law will have to face trial after it was revealed that family members had remitted some $30 million to a Swiss bank account, prompting allegations that the family has a $69 million slush fund. Corruption scandals are being revealed one after another.

However, corruption allegations are not new for Chen. It started when he was serving as mayor of Taipei, and was allegedly involved in pay-offs for civil service appointments. In 2006, when Chen was the incumbent president, his wife was indicted for taking bribes from a department store and a construction company, and his son-in-law was taken into police custody on a charge of insider trading.

He has since then been pressured to step down while being labeled a “vegetable president.” Now, his son and daughter-in-law are also under suspicion.

What happened to the leader of Taiwan’s democratization? When the half-century rule of the Kuomintang Party ended and Chen of the Democratic Progressive Party took office in 2000, the Taiwanese had great expectations of him.

Born to a poor farming family, he served a prison term for publishing an anti-government magazine when he was working as a lawyer. He formed the Democratic Progressive Party with fellow anti-government figures and began pursuing drastic reform. His brand was clean, anti-corruption politics.

Now, the very same politician who drove out corruption has himself fallen into its swamp.

However, Chen’s fall is not for nothing. After ruling for 50 years, the Kuomintang became an opposition party.

Corruption has been rooted out from the Kuomintang, and it now regards the citizens differently.

It is also significant that a political party mainly made up of native Taiwanese has gotten a chance to rule the country. The native Taiwanese make up 85 percent of the population. The experience enabled the party to overcome tension between the Taiwanese and the mainlanders and begin to cooperate.

There is no mathematical formula in politics. Politics is the art of the possible; patience, understanding and tolerance are important variables. These elements cannot be expected without undergoing the experience of changing shoes.

Such an experience is precious to Koreans as well. However, we are all too quick to forget about such experiences.

On July 24, 2000, a National Assembly steering committee meeting was held, and lawmaker Chun Jung-bae, the proxy chairman, declared the meeting open at 2:28 p.m.

While the committee chairman Chung Kyun-hwan’s name can be found in the attendance list, the stenographic record does not include the procedure of handing over the direction of the meeting to lawmaker Chung.

The record of that meeting states, “I declare the steering committee meeting open. A revision bill of the National Assembly Act, Clause 2 is laid before the Assembly. The details of the bill ... (disturbance) and evaluation report are replaced with printed material. Let’s skip further discussion, and I announce ... (disturbance).”

The record concludes with, “The meeting was suspended at 2:29 and was not resumed.”

It was the infamous “rush job” that crippled the operation of the National Assembly for over 100 days.

The ruling New Millennium Democratic Party attempted to reduce the requirement for a negotiation body in the National Assembly from a minimum of 20 seats to 10 seats for the United Liberal Democrats, its coalition partner. The ruling party, long in the opposition, had stopped similar rush jobs in past administrations over 50 times. The citizens were dumbstruck by the abrupt turnaround when it became the ruling party.

This time around, having drifted for 82 days, the National Assembly was finally ready to be convened. The floor leaders had made agreements only to be reversed by one or the other - objection from the Blue House and then opposition from the party chairman. The Democratic Party held back, wary of candlelight vigils, while the Grand National Party was ready to push for a unilateral composition.

The first impression of the National Assembly in the new administration has not changed considerably. The only difference one can see is that the ruling party and the opposition party have swapped positions, with the majority shifting. Their arguments remain the same.

The two parties barely reached an agreement thanks to this drawn-out experience of switching roles.

We cannot continue with the vicious cycle.

As the lawmakers stubbornly carry on with their fits of shouting and physical fighting, it’s little wonder that people are increasingly ignoring the law and imitating their immature antics.

An opposition party leader even met with a fugitive and sought understanding for having made a political agreement. As the politicians insist that they are being “politically persecuted” after having committed an illegal act, a television producer and labor unions make the same argument.

The Grand National Party wants to revise the National Assembly Law so that the seats of the Speaker and committee chairmen cannot be occupied by force.

It is studying the case of Britain’s Parliament, where the Speaker can order anyone who occupies the seat to leave the chamber and suspend him from the job for five days. This is a direction we should pursue. When such a revision is made, it will obviously be advantageous to the majority Grand National Party.

Politics is different from other social fields. Negotiation and compromise should be emphasized over expediency. We expect politicians to negotiate, compromise, reach consensus and integrate the society. If not, the majority party will have its way.

Our memories of rush jobs are still fresh, and politicians are still factionalists. The minority should be guaranteed legal means to oppose, such as filibustering. We should have a system where we can reach an agreement even when the positions change. The outcome can be left to the judgment of the citizens just as impeachment is left to voting.

*The writer is the senior political and international news editor of the JoongAng Ilbo.