Why old houses are the best

Why old houses are the best 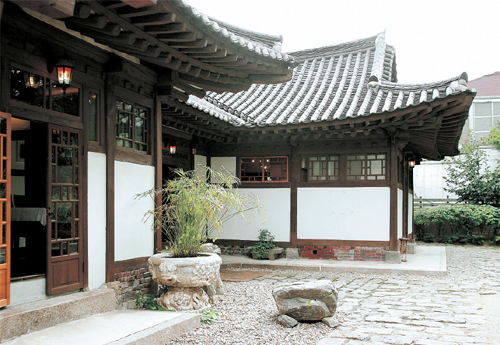 Farm Cottage, a pension house in Gyeonggi, consists of two hanok rescued from eastern Seoul in the 1980s.

“A hanok is a spiritually rich house. Unlike apartment and office buildings, a hanok affords the spiritual and emotional luxury of feeling the changes of the seasons and living a quiet life within its eco-friendly structures.”

This heartfelt tribute to traditional Korean houses was written by Kim Bong-ryong, an architecture professor at Korea National University of Arts, from the book “I Will Live in Hanok.” Published last April, the book is a eulogy to hanok, planned by the Cultural Heritage Organization with contributions from a group of architects including Kim.

Following rapid industrialization in the 1960s, many hanok were demolished and replaced with Western-style high-rise buildings. Today, only about 14,000 hanok remain in the capital.

Since 2001, the Seoul metropolitan government has been working on preserving the city’s hanok, most of which can be found in the Jongno, Seongbuk and Dongdaemun districts. The government has introduced various measures, including a ban on real estate development in hanok-concentrated areas, and paying for remodeling costs. 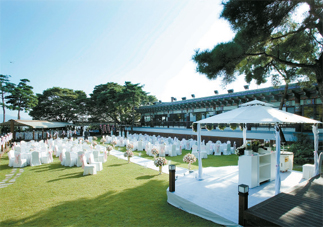 A hanok-style wedding at Sheraton Grande Walkerhill hotel. Provided by the organizer

“Living in a hanok feels very soothing because it’s made of wood,” said Kim Min-jung, 29, who moved into a decade-old hanok in Seongbuk district about two years ago.

“People normally think it would be uncomfortable to live in traditional structures because they are not well-equipped with air-conditioning or heating systems, but I’ve found out that my hanok is cool in the summer and pretty warm in cold weather. Also, people who come to visit say they love the smell of the wood.”

Mingadaheon, or “a tea place for the Mins,” is one example of a hanok that has been given a new lease of life thanks to the government’s conservation efforts. 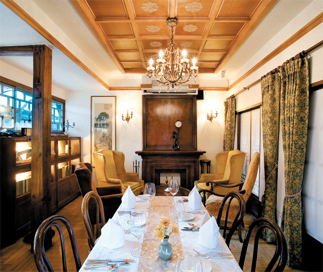 Mingadaheon is a restored hanok in northern Seoul, originally built in the mid-20th century and now an upscale restaurant. Provided by the organizer

The house, located in Insa-dong, central Seoul, used be owned and occupied by the family of Min Ik-du, a descendant of Korea’s last queen, Myeongseong, or Queen Min, in the early 20th century. It fell into a state of disrepair after being sold to another family, on the verge of falling down until the city intervened.

Today, Mingadaheon is an upscale restaurant, and has been designated Important Folklore Material No. 15 by the city.

“The house was perfect for my envisioned business,” explained Lee Chul-hyoung, the president of Winenara, which runs the restaurant. “This modernized hanok was built in 1930 when Korea began to accept Western culture. I wanted to carry on with that spirit of East meeting West, and open a hanok restaurant serving Western-style food and wine.”

Mingadaheon is a classic example of a restored hanok, featuring indoor restrooms and long enclosed halls between the rooms instead of daecheong-maru, or open-air wooden floors.

“It feels like you’ve traveled back in time, dining in a traditional hanok in the heart of the bustling city,” said Lee Dong-young, a Mingadaheon regular, as he enjoyed wine with his friends in the garden.

“Most hanok restaurants serve Korean food, but this one is unique in that it merges the Korean setting with Western food.”

But the hanok’s historic structures pose some challenges according to Lee. The kitchen is smaller than in modern buildings. Also, the building’s maze-like layout can only accommodate a few tables. And since it’s an old wooden building, it requires frequent mending here and there. 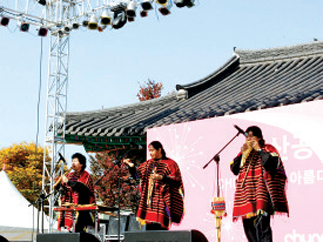 Namsan Hanok Village is one of the venues for the Chungmuro International Film Festival. Provided by the organizer

But Lee still dreams of opening another hanok restaurant.

“The hanok is picturesque in all weathers - fair, rainy, snowy. And it has the power to make people feel calm and peaceful. Sixty percent of our customers are foreigners. I think it’s important that foreign tourists come in and breathe with our traditional houses, instead of just observing them from afar,” Lee added.

Another old hanok that narrowly escaped demolition, in Gapyeong, Gyeonggi, has been transformed into a pension house. Noh Jin-sang, a collector of ancient furniture and artwork, purchased two hanok in eastern Seoul set to be destroyed as part of a land development project in the 1980s, relocated them to a suburban area and opened them to visitors.

“It was heartbreaking to see hanok being demolished,” Lee said. “I was thinking of moving to the suburb to live in a hanok. So I thought, ‘Why not just move the existing hanok?’”

In 1984, Lee bought a 150-year-old hanok for just 700,000 won ($668) and a 250-year-old hanok for 3 million won, taking them carefully apart he rebuilt them in the scenic village near Lake Cheongpyeong. Once the residences of rich merchants, the two hanok are classic commoners’ houses reflecting lifestyles in the Joseon Period (1392-1910).

Lee initially allowed visitors to stay in the houses on an ad hoc basis, but it wasn’t until 2004 that he turned them into a pension named Farm Cottage.

Although this meant increased maintenance and costs, Lee thought that the houses felt dead without occupants. He is now looking into turning them into a cultural center.

“The houses are getting old and some guests are not as cautious as they should be. That really worries me because my original goal was to preserve the traditional structure,” Lee added.

Kim Hong-sik, an architecture professor at Myongji University with a keen interest in protecting wooden cultural properties, supports the various uses of hanok today, but is also cautious about non-professionals handling the old, wooden structures.

“It’s hard for individuals to preserve hanok on their own,” Kim said. “It has to be done with professionals who understand their architectural aspects. Regional governments must also acknowledge their historic importance.”

But the majority of experts say the hanok’s versatility presents many possibilities.

“A hanok is so culturally diverse that with a table it becomes a dining room, and with bedding it becomes a bedroom,” said Kim Young-sub, an architecture professor at Sungkyunkwan University who also contributed to I Will Live in Hanok.

“From a conservative point of view, using a hanok as a restaurant or a pension is limiting its function. But hanok just have too much to offer to their occupants that it would be a shame to leave them empty and deserted.”

Beauty with a purpose: Hanok enjoy revival as performance venues

On a crisp April evening this year, the beautiful strains of classical music filled the air at the old residence of former President Yun Po-sun. The 130-year-old hanok in Insa-dong, central Seoul, is often cited as one of the most representative hanok structures in the country.

It’s also a leading example of a fast-emerging trend. In recent years, an increasing number of hanok are being used to stage contemporary arts performances.

Organizers of the 1st Chungmuro International Film Festival last year chose the Namsan Hanok Village in downtown Seoul for outdoor film screenings as well as selected performances. For this year’s festival, slated for Sept. 3 to 11, the organizers have again planned outdoor screenings at the hanok cluster.

“Our festival hopes to develop into an international event,” said Park Eun-seon of the organizing committee. “We picked the Namsan Hanok Village for one of our venues because the traditional atmosphere appeals to both Koreans and foreigners.”

While historians, architects and authorities are looking at various ways to utilize hanok in the modern world, many say it is important to highlight the hanok’s traditional elements and historic meaning.

“Instead of trying to alter hanok to fit the ‘new programs’ developed for the structure, it is wiser to devise programs that suit hanok and their existing values,” said Song In-ho, an architecture professor at the University of Seoul.

On Thursday, a musical will take place at a recently restored hanok in Yeoju, Gyeonggi, that was the birthplace of Korea’s last queen, Myeongseong, or Queen Min. The performance, which will be a 20-minute highlight from the hit Korean musical “The Last Empress,” will be part of a one-day history tour of the life of Myeongseong organized by the musical production company and Korea Tourism Organization.

“The performance will need no special effects as the setting itself will make the musical shine,” said Park Jong-hwan, one of the organizers. “We worked closely with the Cultural Heritage Administration and Yeoju County officials in order to make sure we cause no damage to the historic house.”