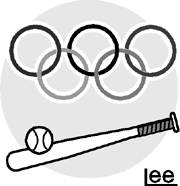 At the 2004 Athens Olympic Games, baseball proved to be something of a problem for the hosts. It would be no exaggeration, either then or now, to say that baseball does not exist in Greece. Constructing a new baseball field was a promising start, but the country had absolutely no know-how on how to broadcast games on television or manage the field. After staging just 32 ball games at the Olympics, one wonders what use the Greeks now have for the ball park.

As the host of the Games, Greece automatically had the right to compete in the event, but still had difficulties in just forming a team. The quick-fix Greek team struggled to a last-place showing of the eight teams, sharing the wooden spoon with Italy.

Three years later, the International Olympic Committee voted to cut baseball and softball from being played at the Games. Beijing was to be their swan song.

The facts are, of the 200 IOC members, only 20 countries play baseball. And of these, it is mainly the North and Central American nations such as the United States, Canada and the Caribbean countries and East Asian countries such as Korea, Japan and Taiwan that “play ball.” Some even say the sport epitomizes American-style capitalism. However, this argument against the sport is questionable, considering Cuba’s passion for baseball.

In any case, European countries, the strongest and most numerous voting bloc in the IOC, have no interest in baseball. The United Kingdom, which will host the 2012 Games, enjoys cricket, and like Greece, would struggle to find a proper baseball field.

For most enthusiastic Korean baseball fans, this decision is quite incomprehensible. If we say that it’s because others don’t yet know the charms of baseball, we may well be displaying a selfish view.

But a close victory at the end of a seesawing game; a victory rising out of the ashes of a crisis; the unexpectedness of a perfectly-hit ball flying in the sky or a miscued swing becoming a valuable base hit, lead us to say that baseball is a microcosm of life, as these dramatic elements determine success or failure.

The Korean team on Saturday night demonstrated the exciting spirit of baseball in winning the gold medal.

We congratulate them on a victory few had expected. Also, we hope once again to see the white ball fly at the 2016 Olympic Games.

We need to remember that although soccer was not played at the 1932 Los Angeles Games, it was promptly restored four years later in Berlin.