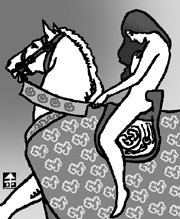 There is a famous painting that depicts a beautiful young woman riding naked on a white horse. It was the masterpiece “Lady Godiva” by British painter John Collier in 1898.

Godiva was the wife of Leofric, Earl of Mercia and Lord of Coventry in England around the mid-11th century. At that time, her husband’s tenants were suffering under oppressive taxation. Taking pity on the common people of Coventry, she appealed endlessly to Leofric to ease the burdensome tax. His response was to laugh sardonically, saying, “I would grant your request if you would ride naked through the streets of the town.”

Finally Godiva took him at his word. As the townsfolk stayed home, drawing their curtains shut and resisting the urge to peek out from their windows, she went on her beautiful ride. Keeping to his word, Leofric was forced to abolish the onerous tax.

From the painting of Lady Godiva riding naked through the town, we can’t help but feel that she was a noble-minded woman of true inner beauty.

Hanging at the entrance of the National Gallery of Art in Amsterdam is Rubens’ “Simon and Pero,” a painting that often leaves viewers with a slight touch of discomfort.

The painting shows a white-haired manacled prisoner reclining onto the lap of a young woman to feed at her breast.

The Latin writer Valerius Maximus provided the explanation for this touching story. Simon was an elderly man in prison awaiting execution, forbidden to eat. But the jailer allowed Simon’s daughter Pero to visit him. She nourished her starving father by giving him her breast.

Upon seeing this act of love, the Roman authorities were so impressed they decided to set him free.

Godiva is now a world-renowned chocolate brand, and the story of Simon and Pero was a theme explored by most painters from the 16th century onwards.

The Korean baseball team has offered us a new hope and dream. The team’s manager, Kim Kyung-moon, revealed he had a dream after winning the gold medal at the Beijing Olympics. In his embarrassing dream, Kim was naked when interviewed by reporters.

Now, suddenly, being nude or naked fills us with joy. It is sweeter than Godiva chocolates or Pero’s breast.

In a dry world, the Korean baseball team gave us a sense of satisfaction. We hope that the manager Kim will one day realize his fantastic dream.