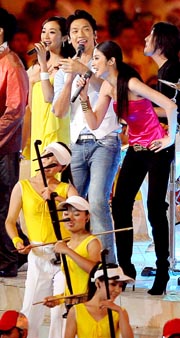 Any remaining doubts that Rain is a global star were dispelled last Sunday at the closing ceremony of the 2008 Beijing Olympics in the Beijing National Stadium.
Rain, whose real name is Jeong Ji-hun, sang “Beijing, Beijing, I Love Beijing” in Chinese with five other megastars, including Taiwanese singer Wang Leehom, Chinese actor Jackie Chan and singer and actress Kelly Chen.
Over 100,000 viewers watched the ceremony live inside the stadium and billions turned on televisions worldwide.
The International Olympic Committee officially asked Rain to perform at the ceremony three months ago, according to J-Tune Entertainment, his agency.
Zhang Yimou, the Chinese filmmaker who was also artistic director for both the opening and closing ceremonies, recommended Rain to represent Korea, the company added.
According to AGB Nielsen Media Research, 47 percent of Korean viewers watched the closing ceremony last Sunday on KBS, MBC and SBS TV.


As Venice film fest kicks off, Korea out in the cold
The 65th Venice International Film Festival, organized by the Venice Biennale, kicks off today at 7 p.m. local time in Venice, Italy. The festival ends Sept. 6.
Joel and Ethan Coen’s “Burn After Reading,” starring George Clooney and Brad Pitt, will be opening the festival. Sixty-six features and short films from 18 different countries will be screened.
Screenings include Jonathan Demme’s “Rachel Getting Married” (2008), Darren Aronofsky’s “The Wrestler” (2008) and Pupi Avati’s “Papa di Giovanna” (2008).
No Korean films were invited to screen this year.


Monster invades sauna in sequel to horror flick ‘The Host’
The next time you head to the sauna, watch out - there could be monsters there, according to Chinese film director Ning Hao, who is remaking the Korean monster flick, “The Host” (2006).
Ning was in town to attend the Cinema Digital Seoul Film Festival held from Aug. 20 to 26.
The Chinese sequel to Bong Joon-ho’s The Host will be filmed in China.
“Unlike the original film, where the monster appeared in the river, this monster will appear at a sauna,” Ning said last Friday.
The sequel, with an all-star Korean and Chinese cast, is planned for release late next year. An estimated 12 billion won ($12 million) has been budgeted for production.