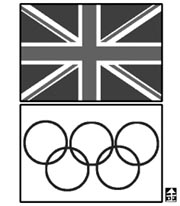 In June 1948, the Korean government had not yet been established and the country was under the administration of the United States military. But Korea was able to participate in the London Olympics that year, thanks to Lee Sang-bae, the Joseon Amateur Sports Association’s director who convinced the International Olympic Committee of Korea’s inclusion.

Through a nationwide process, 67 athletes were selected to compete in six sports at the Olympics. National support was high. The Olympic Fundraising Committee sold 1.4 million government bonds to support the athletes and was thus able to raise sufficient funds to enable the athletes to participate in the Games. On the morning of June 21, the athletes gathered at the YMCA in Seoul. They changed into their official uniforms and marched together to Seoul Station. The next day the athletes sailed out of Busan Harbor.

Instead of passports, they carried with them ID certificates typed on paper. The boat sailed through Fukuoka and Yokohama before arriving in Hong Kong on July 2. Because the flight to Europe was on a small airplane that only sat 40 people, the athletes were split into two groups. The flight transited through Bangkok, Calcutta, Baghdad, Cairo, Rome and Amsterdam.

The team arrived in London on July 11 - eleven days after leaving Hong Kong and a staggering 21 days after departing from Seoul.

These Games would mark the first time our athletes competed under the Korean flag in the Olympic Games. Korea had set its hopes on a medal in the marathon, where we had three competitive runners, including Suh Yun-bok, who won the 1947 Boston Marathon.

However, Suh, exhausted from the long trip, only made it to 20th place. Instead, Kim Sung-jip in weightlifting and Han Su-an in boxing won bronze medals, lifting Korea to 24th place among 59 countries competing, second only in Asia to India, who had won a gold medal.

Sixty years later, at the Beijing Olympic Games, the Republic of Korea ranked seventh with 13 gold medals. People who rejoiced day after day are now suffering from Olympics withdrawal syndrome.

We are already looking forward to the next Olympic Games in London, although this time it will only take 10 hours to get there by plane. There will be no instances of spying on other countries’ training sessions, like we once did when we didn’t know the international rules. Nor will our boxers climb into the ring on an empty stomach again, not knowing the schedule had been changed.