Edwardian London comes to town in ‘My Fair Lady’

Edwardian London comes to town in ‘My Fair Lady’ 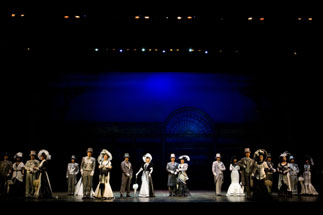 A scene from the musical “My Fair Lady.”Provided by the organizer

With a pompous professor and a simple but lovable flower girl, it’s a story as old as time, but one that never fails to appeal. So theatergoers are in for a treat with the Korean version of “My Fair Lady” currently playing.
“Although the original Broadway play was staged over 40 years ago, the story transcends time and space - for the older generation, this musical will rekindle lost memories of youth,” said Shin Eun from producers OD Musical Company.
The story, based in London, centers on the stuffy Professor Higgins and Eliza, a flower seller. When Higgins encounters Eliza caterwauling on the street one day, he bets a friend that he can make Eliza an elegant lady within six months, and eventually ends up falling in love with her.
The story is based on “Pygmalion” (1913) by Irish playwright George Bernard Shaw (1856-1950). Shaw received an Academy Award for Best Screenplay in 1938 for a film adaptation of his play.

My Fair Lady debuted on Broadway in 1956, with Julie Andrews from “The Sound of Music” fame as Eliza.
Audrey Hepburn later starred in the same role in a Warner Brothers film released in 1964. The film won eight Academy Awards including Best Picture and Director.
Actress Kim So-hyun, who plays Eliza in the Korean version, said she’s thrilled to have been cast in the role. “I’ve been in big musicals like ‘Jekyll and Hyde’ and ‘The Sorrows of Young Werther,’ but this is my first time starring in a musical where the female character leads the story,” Kim said.
Lee Hyung-chul, better known for television dramas “Over the Rainbow” and “On Air,” plays Higgins in his musical debut.
The cast also includes Kim Jin-taek as Colonel Hugh Pickering, Yoon Bok-hee as Mrs. Higgins, Kim Sung-ki as Alfredo Doolittle and Byun Jae-won as Freddy Eynsford-Hill.