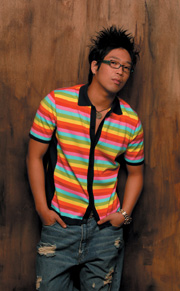 Korean hip-hop artist M.C. Mong will perform at the Jamsil Indoor Gymnasium in southern Seoul this Saturday, kicking off a nationwide tour that will continue through December. [JoongAng Ilbo]

JAMSIL INDOOR GYMNASIUM
Saturday: “M.C. Mong Nationwide Tour Concert.” Korean hip-hop artist M.C. Mong will be performing the Seoul leg of his nationwide tour in southern Seoul this weekend.
As a rapper, actor and TV personality, and currently one of the stars of the hit TV show “1 Night, 2 Days,” M.C. Mong is one of the hottest names in the local entertainment industry, with an ever-growing fan club.
Although he first broke onto the entertainment scene as an actor in 2003, it wasn’t until the release of his third album “The Way I Am,” in 2006, that he really joined the ranks of the music industry’s big names. The album knocked superstars such as Rain and Se7en off the charts.
In April this year, he released his fourth studio album, “Circus: Show’s Just Begun,” which has proved to be immensely popular.
Earlier this summer, his pool party concert at Sheraton Walkerhill Hotel broke audience attendance records. Fresh on the heels of this success, his nationwide tour is his opportunity to cement his place as the premium concert performer in Korea.
Starting from Seoul, M.C. Mong will tour the country through December.
Tickets range from 50,000 won to 70,000 won.
The concert begins at 8 p.m.
Sports Complex Station, line No. 2, exit 6
(02) 1544-0765, www.interpark.co.kr

Monday: “Avril Lavigne: Live In Korea.” Avril Lavigne, the Grammy-nominated pop/rock icon, is back in Korea to perform for the first time in three years. Despite lagging sales in the music industry, Avril Lavigne has bucked the trend with several successful albums.

Lavigne is known around the world for songs such as “Complicated”, “Sk8er Boi”, “I’m With You”, “My Happy Ending” and “Girlfriend.”

She released her third studio album, “The Best Damn Thing,” last year, reaching No. 1 on the pop charts in Korea.

Despite having released only three albums, she has sold 30 million units - 4 million albums within Korea alone - proving that she is regarded as one of the biggest international pop singers among Koreans.

She has already performed in Korea three times, each a huge success. Her fourth performance here is part of a world tour named “The Best Damn Tour.” The concert will showcase Avril Lavigne’s newer, more mature songs as well as her hugely popular earlier hits.

Tuesday to Wednesday: “Jazz Master Series.” Concert promoter Yellownine is presenting the 2008 Jazz Masters Series, an opportunity to see performances by top jazz musicians from around the world on one stage.

Taking place over two days next week in southern Seoul, the event will feature some of the most influential and loved jazz masters. On the first day legendary jazz guitarist, George Benson, and the master of crossover music, Al Jarreau, will play together.

On the second day of the festival, four well-known jazz musicians will grace the stage: David Sanborn, one of the best saxophonists of the contemporary pop jazz scene; Stanley Clarke, a powerful and speedy bassist; Marcus Miller, a multi-player of fusion jazz music; and Victor Wooten, a musician known for his brilliant technique.

This is a golden opportunity for jazz lovers to hear some world-class music performed by jazz masters at the top of their game.

To Oct. 5: “Mirror Image: About a Self-Portrait.” This exhibition explores the diverse aspects and meanings of self-portraits.

Over time, the self-portrait art form has evolved from reliance on the conventional method of using a mirror, to the emergence and development of photography and other new mediums.

This show sheds light on the artist and his or her self and the relationship and meaning of works representing the self. It embraces the mirror as one of the primary means to remind ourselves of the world reflecting both the exterior and the interior.

The exhibition is on at SeMA’s annex in Gwanak District, southeastern Seoul. The museum is open from 10 a.m. Tuesdays through Sundays, closing at 8 p.m. on weekdays and 6 p.m. on weekends and holidays.

T0 Oct. 12: “Kim Bohyeon.” The work of Korean-American artist Kim Bohyeon is on display at the National Museum of Contemporary Art, located in the Seoul Grand Park, Gwacheon, south of Seoul.

After settling in America in 1955, Kim proceeded to take part actively in the New York art scene as a means to express the loneliness and hardships of living in a foreign country. His work ranges from intensely abstract expressionist paintings to extremely realistic still-life portrayals, as well as depictions of paradise on Earth.

Friday to Open Run: “Gypsy Moon.” The Sheraton Grande Walkerhill Hotel is presenting an 80-minute fantasy show produced by the Australian Dion and Randall Production company. It debuted in 2006 and has enjoyed great success in the casino hotels around Australia’s Gold Coast.

The show is about the attractive Gypsy Queen who travels around the world to exotic destinations by moonlight. Added to the show are other exciting international acts such as a cabaret show featuring 12 topless female dancers, an all-male Georgian dancing group, a mysterious French pantomime, Brazilian stunt artists with motorcycles and a Las Vegas magic show.

A traditional Korean performance will add a local touch to the show and will be of special interest to expatriate theatergoers.

Sept. 4 to 10: “King Lear.” One of Shakespeare’s four tragedies, King Lear is considered to be one of his greatest works, covering themes of greed, betrayal and cruelty.

The aging monarch King Lear, blind to his own weaknesses, decides to divide his kingdom among his three daughters, according to which one publicly professes the most love to him. The selfish Goneril and Regan pretend to love him but later treat him cruelly, while Cordelia, the only loyal and unselfish daughter is disowned, leaving King Lear a broken man.

Together with producer Lee Byeong-hoon, the Michoo Theater has been working on this play since last summer. From basic acting training to high-level physical training, the cast and crew have worked together for a year to produce an exceptional performance that will leave theatergoers pondering the power of human nature and love.

Sept. 5 to Oct. 18: “Shoe Shine Boy.” Does your life feel like a pair of grubby sneakers, worn-out but comfortable to wear? Or does it feel like luxurious designer heels that elicit “oohs” and “aahs” wherever you go?

Shoe Shine Boy is an enchanting love story set in a neglected shoe-repair store. The musical centers on a poor shoe-shine boy named Sang-gu who, with help from a magical old man, moves from his life at the shoe store to the high-flying world of a large company he had always dreamed of working in.

There, the humble Sang-gu falls in love with the wealthy and beautiful Min-hee. But before their budding romance can truly grow, the charming Tae-su enters the scene, complicating their romance. Will Sang-gu, whose only talent is reading people by looking at their shoes, be able to overcome obstacles to his love?

Backed by a powerful soundtrack of pianos, violins and drums, Shoe Shine Boy will draw you into its fairy-tale world.