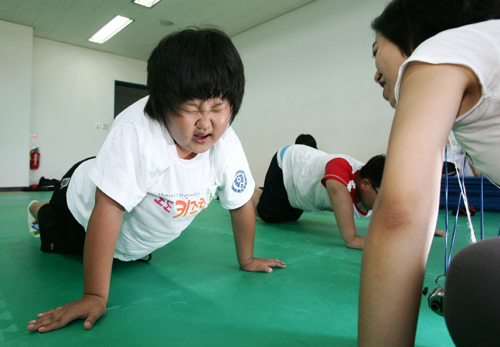 A camper at Toto Kids Run School works out, encouraged by a volunteer from Yonsei University’s sports and leisure studies department By Kim Hyeon-dong; provided by the organizer

WONJU - When applications for the children’s weight loss camp Toto Kids Run School began last month, more than a hundred desperate letters poured in.
Concerned parents of overweight children, or the children themselves, were pinning their hopes on the summer fitness camp to help the children get in shape and regain lost self-esteem.
Here’s a sample of the letters that the organizers of the camp received:
“My son wants to become a baseball player when he grows up. He always leaves home carrying his glove. But as his mom, it’s heartbreaking watching him try to play the sport. His physique always gets in the way.”
“My uncle tells me to become a weightlifter because I’m so big. But I’m hurt whenever he says that because I have other dreams. I want to become slim and wear pretty dresses and skirts.”

Justin Jeon a professor of sports studies at Yonsei University, supervises a swimming class at the school.By Kim Hyeon-dong; provided by the organizer

“My daughter has been picked on by her friends who have called her a pig since she was in first grade. She’s now in fourth grade and she’s still called that nickname. I think she’s deeply hurt and has lost her self confidence.”
“A couple of days ago, I was trying to put on my socks and I couldn’t crouch because my stomach and thighs have gotten so big. I had to bend my legs to the side to put on my socks.”
In June, the sports lottery operator Sports Toto and the sports and leisure studies department at Yonsei University in Seoul announced a joint project called Toto Kids Run School aimed at tackling rising child obesity.
Sports Toto oversees and finances the camp, while Yonsei University lends its academic and scientific expertise in devising an appropriate and effective program for dealing with the weight issue.
“The camp is more than just about losing a few kilos,” said Lee Hyun-jin, an assistant manager at Sports Toto.
“Our company envisions a healthy, strong Korea. In that sense, the program seeks to foster a healthy body and mind among our children, helping them experience different kinds of exercises and sports, learn about nutrition, participate in group activities and acquire a can-do attitude,” Lee said. 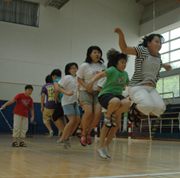 Skipping students on Day 4 of the camp. Provided by the organizer

Earlier this month, the organizers invited 50 fourth and sixth graders from the slew of applicants to join a seven-day camp at the Yonsei campus in Wonju, Gangwon.
The camp is no walk in the park — students are not allowed to bring mobile phones, portable media players, computers or Nintendos with them.
The campers can chat with their parents over the phone, but only for a maximum of 30 minutes a night.
One of the few concessions this summer was letting the children watch bits of the Olympic Games on television.
Breaking camp rules can be costly. If the participants fail to stick to the tight schedule, they receive a negative assessment at the program’s conclusion.
The day starts at 7 a.m. with morning exercises and ends at 10 p.m. with journal writing. A typical day includes aerobics, football, basketball, swimming and golf, plus classes on nutrition, movement and psychology.
Surprisingly, snacks are served in between meals, but instead of favorites like potato chips, cookies and chocolates, the camp serves sweet potatoes, bananas and sweet corn.
The dramatic change in lifestyle is not easy for the campers to adapt to.
“It’s hard living like this because I like eating very much. I love chicken and I love pizza,” said Kim Yu-jin, a sixth grader from Seoul, after finishing a low-calorie lunch of curry rice and vegetables and a small piece of pork. She was on Day 6 of her stint at the camp.

A camper works on her flexibility on Day 6. By Kim Hyeon-dong

Kim said she rarely exercised before coming to the fitness camp and applied for a spot at her dad’s behest.
A teacher at the camp acknowledged that the program is challenging.
“Campers will consume about 1,600 to 1,900 calories a day,” said Gu Hyeong-mo from Yonsei University. “That’s tough going for some adults, too, so these kids are doing pretty well.”
Some of the kids are more determined than others.
“The basketball and football sessions were not easy at all,” said Seo Hyeon-seok, a sixth grader from Ansan, Gyeonggi. “But it was alright because I felt like I was losing weight.”
Seo, whose weight we cannot disclose, became self-conscious about his girth about two years ago. It was his own idea to apply for the camp.
Nicknamed Winnie the Pooh at school for his figure, Seo says he practices taekwondo everyday for an hour and eats his rice with chopsticks instead of spoons hoping it will help him eat less. But he’s worried that once he goes to middle school, his increased study load won’t allow him to exercise as much.
About 12 percent of Koreans aged one to 20 were obese in 2005, more than double the figure seven years ago, according to the Korea National Health and Nutrition Examination Survey run by the Ministry for Health, Welfare and Family Affairs in 2005. The survey is run every three years.
The results of the survey seem to suggest that a Westernized diet, a more sedentary lifestyle that revolves around computers and cell phones, and a reduction in exercise time and outdoor activities probably accounts for the rise in obesity. 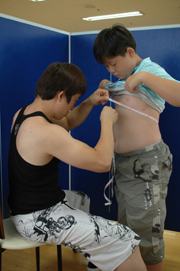 A student has his waistline measured at the end of the camp. Provided by the organizer

In response to the weight issue, numerous so-called fat camps have sprung up, making use of the summer holidays to fight flab.
The Jogye Order of Buddhism opened a weight loss school called “The Less, The More” at the Bogwang Temple in Paju, Gyeonggi, earlier this month, and Chonbuk National University Hospital in North Jeolla and the Gunpo city government in Gyeonggi organized similar camps last month.
Toto Kids Run School charges just 50,000 won ($46) a person, as the organizers have defined it as a social contribution project, instead of a profit-making one. The organizers plan to donate any profit to charity. Other commercial fitness camps charge between 70,000 won and 1.4 million won depending on the duration of the program.
Students like Seo are probably right when they worry that they will get fatter as they move up to the next grade at school.

Research from the Ministry of Education, Science and Technology reveals that in 2006 the obesity rate for male elementary school students was 13.1 percent, 13.6 percent for male middle schoolers and 15.1 percent for male high school students.
The study concludes that the determining factors were increased study demands and less time for sports.
Experts say children face chronic health risks if they remain overweight.
“If not treated properly, child obesity is like a time bomb,” said Justin Jeon, a professor of sports and leisure studies at Yonsei University. Jeon is also the principal of the Toto Kids Run School.
“Studies show that 80 percent of child obesity leads to adult obesity, which results in early, untimely diseases and even death. Society loses out because of the medical costs and the impact on the labor force.”
Jeon, also a member of International Paralympics Committee, is keen on adapted physical education - developmentally appropriate sports and games.
Another factor accounting for the increasing numbers of obese children is thought to be connected to the rising numbers of working mothers.

According to the Korea National Health and Nutrition Examination Survey in 2005, kids with working mothers were twice as likely to be overweight than kids with stay-at-home moms.
“Because both my husband and I work, my mother took care of my son,” confessed a mother of a camper at Toto who declined to be named. “It’s been like that for six years now. We felt sorry we can’t spend much time with him, so we bought him whatever he wanted - toys, food, etc. Now we feel guilty because we failed to teach him self-control.”
Experts say children with working mothers tend to spend on average five hours a week more watching TV and using computers than kids whose parents stay home during the day.
So, are the camps successful? On average, each student shed about 2 kilograms (4.4 pounds) at Toto Kids Run School, organizers say.
But organizers say their goal is not to make the students lose a significant amount of weight in a short period of time, as rapid weight loss can affect muscle development in young people as well as other health problems.
Instead, the aim is to help the students take home a better understanding of their bodies and nutrition and gain self-confidence and higher self-esteem.

“Based on what we learned so far, what are some of the ways to stay fit after this camp?” Jeon of Yonsei University asked his students during his last lecture at the camp.
“When you want to have a hamburger, you can cut an apple in the shape of a burger and eat it,” yelled one student.
“When you go to the movies, you can take sweet corn instead of buying popcorn there,” said another.
Jeon acknowledges that the real challenge is getting the campers to stick to a routine when they go home.
“The success of short-term camps depends on the aftercare” Jeon said.
To that end, Jeon and his team of health and nutrition counselors keep in contact with the students and assist them in their fitness and diet for the next three months. “We have to see whether these kids can remember what they learned here and continue a healthy lifestyle.”