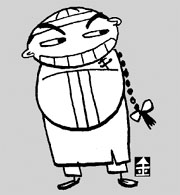 Hatred of foreigners is epitomized by the word xenophobia. “Xeno” means “outsider” and “phobia” denotes fear.
Fear has been a common reaction to people from neighboring countries. Thus, Koreans, Japanese and Chinese all have their own words to speak ill of each other.
The derogatory word Chinese use for Koreans is Goryeobong. Sometimes they add the word ja, meaning person, and call us Goryeobongja, or Gaoribantse.
Why they added the word bong, meaning “stick,” to Goryeo, which refers to Korea, is not clear. One interpretation stems from the Sui Dynasty of China, who attacked the ancient Korean kingdom Goguryeo only to be met by Koreans ?? young and old, male and female ?? rushing out with sticks to beat them back.

To us, this word can be interpreted in a positive way which does not fit with the vulgar way the term is now used.

Another theory is that the word comes from the time when the Japanese plundered the Korean Peninsula on the way to occupying China via Manchuria. In the struggles against Japanese imperialism, Koreans ended up fighting the Chinese with clubs and sticks.

The Chinese called the Japanese who had attacked their country, “Japanese ghosts” and the Koreans who stood at the forefront of the battles “second ghosts.”

It’s possible the origin of the word Gaoribantse comes from this period.

In any case, nowadays it is not exactly used in a welcoming way.

In China these days, anti-Korean sentiment is flourishing.

The cold stares and cruel barbs the Chinese directed at the Korean athletes as they entered the Bird’s Nest for the opening ceremony of the Olympic Games have become the talk of the town.

Among Chinese netizens, negative feelings toward us are spreading beyond what is acceptable. The old term Gaoribantse is likely to be back in vogue.

Although misunderstandings and biases must lie at the heart of the problem, Korea’s position should be different.

We shouldn’t retaliate by looking down on the Chinese or respond with our own cruel taunts.

The words we use affect how we think.

If we start speaking ill or making fun of others by using vulgar words, we can’t objectively judge them by their own merits.

Proper in-depth understanding of others should come first.