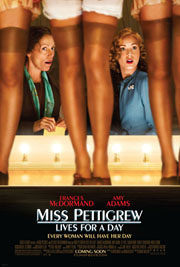 The exhortation carpe diem is perhaps one of the best known Latin phrases.

At least, it’s the one Latin phrase that many people know.

It comes from one of Horace’s odes and is translated as seize the day - enjoy life as it comes, and don’t regret a thing.

In the movie “Miss Pettigrew Lives for a Day,” Pettigrew is a dowdy and somewhat dull, middle-aged jobless governess who seizes her day.

Actually, she seizes a name card left on a desk at an employment agency where she is pleading for a job.

The movie, directed by Bharat Nalluri and starring Frances McDormand and Amy Adams, begins when Pettigrew (McDormand) gets fired by her previous employer.

We get the impression Pettigrew is difficult to work with.

Penniless, jobless and wandering the streets, she begs for another chance at her agency.

It’s then that she chances upon the name card of Delysia Lafosse (Amy Adams), who is looking for a social secretary.

She picks up the name card and is whisked into a world of fashion, luxury and the game of love.

The moment she steps into Lafosse’s lavish penthouse, she gets her first task: to hide a man whom Lafosse slept with the previous night, and remove a bra hanging from a chandelier.

Pettigrew has to act fast because Lafosse has another lover waiting in the wings.

The contrast between the two women provides the dramatic tension in the movie.

Prim and proper Pettigrew differs from other women in the film because she’s frank and dignified, despite her boring dress sense and frumpish hairstyle.

In contrast, vivacious and whimsical Lafosse is torn between three lovers and asks Pettigrew to help her make the most important decision of her life: choosing her “other half.”

One beau is Phil (Tom Payne), a producer’s son who could secure Lafosse fame as a singer but is only infatuated with her beauty.

Nick (Mark Strong) is the owner of the nightclub where Lafosse sings.

Michael (Lee Pace) is a truly magnificent but penniless pianist.

Under Pettigrew’s candid, careful and more than capable guidance, the masqueraders of upper-class England realize their true wishes and dreams.

All of the characters, whether good or bad, have their own quirks that make them endearing. The movie has moments of hilarity and sadness, and the acting is of the highest order, especially the two leads.

Miss Pettigrew Lives for a Day is a satire on English 1930s society as World War II looms, discreetly telling us to seize the day and be true to ourselves.