Cafes in Seoul are carving out a slice of Manhattan and Parisian chic these days, filling counters with moist macarons and cute cupcakes that left our reviewer craving for more. Forget the diet and tuck into our Weekend feature on the latest pastry trend sweeping the capital.
The days of sweet potato cakes are over.
Not so long ago, you would order a slice of New York cheesecake, tiramisu or sweet potato cake with an ambiguous nationality when you met up with friends for coffee and a bit of gossip. But the dessert landscape has evolved over the past few years. Now you can find cupcakes just like the ones at Magnolia Bakery in Manhattan, which is famous enough to appear in several TV shows and movies, and macarons like the ones at the upscale luxury cake and pastry shop Laduree in Paris.
I am a self-confessed sugar addict, and over the last week, I have explored Seoul’s cupcake and macaron shops, often hidden down alleys in Seoul’s hippest neighborhoods, to indulge my sweet tooth.
After consuming dozens of different kids of cupcakes and macarons filled with a wealth of flavors, I have found that I have an equal passion for both delicacies.
These are my thoughts and recommendations for Seoul’s sweet temptations. 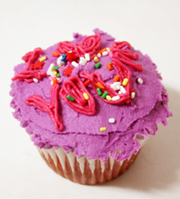 Cupcakes
The cafe Life is Just a Cup of Cake is tucked down an alleyway in Itaewon near the Leeum Museum. The interior decoration dazzles the eye when you first enter. There are only four tables but there are all sorts of colorfully iced cupcakes. My friends and I counted eight varieties on offer when we feasted there. We chose double green tea, very berry, blueberry cream cheese and peanut butter chocolate.
Whereas the Magnolia cupcakes - yes, the subject of Carrie Bradshaw’s cupcake fetish in the TV show “Sex and the City” - are topped with thick sugary icings, frostings from this cafe are much creamier. This was the taste that cafe owner Lee Saem had intended from the start of her venture.
“Cupcakes in the United States are topped with icings made of sugary powders and sometimes with butter cream, but I thought that was too sweet for a Korean palate,” said Lee, a self-taught pastry chef. “So, I developed my own icings mostly based with cream cheese.”
When I tried her creation, I found the base to be moist inside and the icing soft and creamy. My favorite cupcake was the blueberry cream cheese. It had a light, fruity taste, while the peanut butter chocolate went well with the cafe’s iced Americano coffee.
The cupcakes cost up to 4,300 won ($3.97) each, depending on the ingredients.
How did the shop gets its name? “‘Life Is Just a Bowl of Cherries’ is my favorite song, so I named my shop after it,” Lee said. “I hope everyone can feel happy when they nibble on my cupcakes.”
Lee said she bakes the day before or in the morning for aging, and during my visit, Lee was busy doing the icing.
“I bake with Anchor butter from New Zealand, Kiri cream cheese and Valrhona’s 70-percent cacao Guanaja from France and the very best green tea powder, which I bought on my honeymoon in Japan,” she said.
If you are looking for more of the Magnolia-style cupcakes, Good Ovening is the place to find red velvet cake.
Kim Shin-ae, also a self-taught cupcake baker, said she became fond of the dessert when she was studying in New York City and took a part-time job at a bakery.
Since April, she has been baking cupcakes for Mug for Rabbit, a stylish cafe in Sinsa-dong, southern Seoul. She will also open her own shop near Dosan Park in the same neighborhood tomorrow.
“My shop will be offering vanilla cupcakes with vanilla icing, vanilla cupcakes with chocolate icing and red velvet cake,” Kim said.
“Those three classics are made with butter cream icing, the way New Yorkers eat them. For people who prefer a lighter texture and taste, we’ll stock six variations topped with fruity and nutty frostings made of fresh whipped cream from Monday to Wednesday. We’ll have another set of six variations from Thursday to Saturday,” she added.
I tasted Kim’s red velvet on my taste tour of Seoul: The cream cheese frosting was just the way I like it. The base was not the fluffy, soft kind. It was perfectly dense and chewy and topped with a generous amount of luscious cream cheese.
Two thumbs up for the baker.
The three butter cream cupcakes cost 4,300 won each, and the fresh cream ones cost from 4,000 won to 4,500 won. If you buy a box of nine cupcakes, the shop will throw in a mini cupcake for free, Kim said.
In addition, Kim will be selling her cupcakes at Dining Forest near Hongik University.

Macarons
My favorite macaron memories are planted in Le Gouter Bernardaud in Hong Kong, a tea salon where my husband and I spent the last of our Hong Kong dollars on four authentic Parisian macarons before heading back to Seoul.
We were celebrating our first wedding anniversary and the bitter chocolate, rose, lemon and salted caramel macarons lent an enchanting and romantic finale to our holiday.
We had one bite each of each, savoring the sweet taste of the chewy ganache and the rich filling.
In essence, a macaron is like a blind date: It’s either love at first sight or you simply don’t want to try it again.
But be careful not to confuse a macaron with a macaroon. The former is sandwich cookie with different fillings; the latter is more like a meringue, often containing shredded coconuts.
Macarons found fame at the Paris cafe Laduree. According to the cafe’s Web site, Pierre Desfontaines, a distant cousin of Louis Laduree who opened the cafe in 1862, first thought of placing a filling between two macaron shells in the early part of the 20th century.
Previously, the macaron was much plainer, and Desfontaines’ new method remained popular.
The small, round pastries used to be rare in Seoul, although they were occasionally served at French restaurants.
Then the dessert chain Sweety BLVD opened in the basement of the Hyundai department stores in Apgujeong-dong and Samsung-dong, southern Seoul. The store is an offshoot of Tasty BLVD, a nearby Italian restaurant.
“We used to sell macarons in a box at our restaurant and they became really popular,” said Jun Seong-ho, the chief pastry chef at Sweety BLVD, said. “We opened the dessert shops in January this year.”
Macarons with 15 different kinds of ganache are available at this dessert boutique, and Jun presents some impressive and creative variations. “In addition to the popular wild berries and rose petals, we also use foie gras and truffle ganache,” Jun said.
The cookie cake has a light, crunchy outside and a moist, sweet and chewy inside and costs between 1,000 won ($0.92) and 1,8000 won a piece.
Jun said all macarons sold at Sweety BLVD are handmade everyday, and they sell about 1,000 to 1,500 pieces daily.
“The best way to enjoy a macaron is eating it immediately after you buy it,” he said. “They should be kept in a refrigerator, where they will keep for one or two days. But they are sensitive and taste best when you eat them fresh.”
Apres-midi, a vendor located inside Shinsegae Department Store in central Seoul, sells eight different variations in two sizes. My favorite is the bigger 2,000 won-piece chocolate wild berry macaron. The store also sells espresso-variation coffee made from Nespresso capsules, and the ginseng flavor macaron is an energy booster for a shopper with tired legs.
Following the trend, Starbucks shops sell macarons at 2,000 won a piece. Although its version of strawberry tasted more like wild berry, the bonus is that the mega coffee chain has outlets virtually on every corner of the city, making the macaron easy to find when craved. 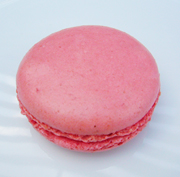