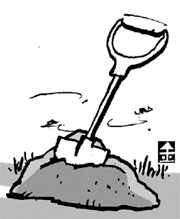 The McCain family that owns Canada’s largest food conglomerate is reeling in turmoil. Since last week, 12 people have died after eating beef and turkey sandwiches produced by Maple Leaf Foods, the country’s biggest food processor. The major culprit behind this humiliation for the McCain family is listeria - a bacteria that causes food poisoning. Listeria is often referred to as a “ubiquitous bacteria,” owing to the fact that it seems to pop up everywhere.

As listeria can be found in both soil and water, plants can easily become contaminated. Thus it can spread to grass-eating animals. The presence of Listeria is constantly tested for in some unpasteurized dairy products and some meat products.

However, if a healthy human eats listeria-tainted food, it is not always such a huge problem. He may experience influenza-like symptoms or no symptom at all. In any case, the infection can easily be cured.

Serious life-threatening side effects or death occur predominantly in the elderly or among pregnant women. These groups tend to exhibit weakened immune systems, which are more vulnerable to the listeria bacteria.

Pregnant women, in particular, are about 20 times more likely than other healthy adults to get listeria, as their cell-mediated immunity naturally decreases during pregnancy so that their systems can embrace the unborn child.

The United States Centers for Disease Control and Prevention deems listeria infections as serious, with an estimated 2,500 cases of infection and 500 deaths per year in the U.S.

Listeria has caused problems in Korea several times. In 1997 Dreyer’s ice cream was found to contain the bacteria, which created a huge uproar at the time. Dreyer’s subsequently withdrew from Korea.

Listeria infection is officially designated as an infectious disease here, although no one in Korea has had listeria food poisoning.

Does this mean that Koreans are highly resistant to listeria?

Maybe not. This is because the incubation period of listeria can be far longer than other bacteria-related food poisoning. However, we should be wary because Korean doctors have not studied listeria in medical school or experienced food borne illness outbreaks like this.

If mass food poisoning does break out, it is a virtual death sentence for food companies.

The collapse of the McCain family dynasty, with their famed 50-year history of business, serves as an important lesson for Korean food companies.