A metropolis of rain, late-night jazz and T.S. Eliot

A metropolis of rain, late-night jazz and T.S. Eliot 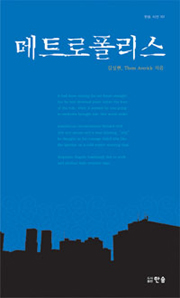 Inspiration can come at any time, so poet Them Averick carries two pens tied to a piece of string around his neck.
“The words and sentences are suddenly there and I have to write them down immediately,” says Averick, who published a collection of poems in May called “Metropolis.”
In the 127-page volume, Averick returns to three themes in his poems - nature, indifference and love.
The images of nature that Averick describes all depict moments of consciousness, i.e. when we are fully attentive about what goes on around us.
In contrast, the indifference that Averick writes about is when that feeling is lost and we walk around without feeling anything.

The love Averick writes about is when you feel distance in a relationship, when one of you is not really conscious and it feels like the person is not really there.
“You have to stay attentive,” Averick says. “Otherwise you lose your spirit of life.”
A Dane from Copenhagen, Averick came to Korea in 1994 to study Korean. He started composing poetry three years later, but not in his native tongue, Danish, or Korean.
English came more naturally as a channel for composition, he says.
Averick’s currently studying for a Ph.D. in English Literature at Sogang University, where he met fellow poet Kim Seong-hyeon, who contributed poems in Korean to Metropolis.

Averick, who is currently working on an extended prose poem, considers poetry an elusive beast. Even though he believes there is no clear definition of poetry, he believes that to be a good poet, you need a solid philosophy underpinning your work.
“I am not quite there yet,” he says. “But I think poetry should be a challenge, an exercise for the brain.”
To him, contemporary poetry isn’t intellectual enough. Aevrick looks for poetry that takes time to read and understand. Poetry shouldn’t be easy, basically, and he is perhaps more interested in the intellectual aspects of verse.
He cites T.S. Eliot as an influence, as well as other less-than-easy poets to decipher, namely Wallace Stevens, e.e. Cummings and Richard Hugo.
When Averick writes, he doesn’t simply want to tell his readers about an idea.

Instead, he wants to write words and sentences that provoke feelings that eventually lead them to the his ideas.
Referring to an untitled poem in the collection, he says, “I wrote [the poem] out of association to emotion again associated to imagery evocated by the sound of a trumpet.
I like listening to jazz late at night. This particular night I heard a melancholic trumpet. I’d heard the song before and it always reminded me of rain and wet streets, a little like singing in the rain but with a melancholic feel to it, dark and empty streets like the feeling you get from reading Eliot’s ‘Preludes.’”
Eliot’s influence is clear in the poem “consciousness” from the collection, a poem in which Avrick says he tries to evoke emotion through the intellect:

“dusk fading its silvery threads into/ a consciousness upon which/ much depends./ here in the valley/flowers bloom but lycidas is dead./ I remember what you said last night/about your friend’s old bathrobe/today we go hunting for a replica.”
Since last year, Avrick has run the Web site Poetryafterhours (www.poetryafterhours.com), a network for poets linking their peers’ Web sites and blogs.
“I just want to meet other poets and keep in touch, learn, share,” he said
Metropolis costs 6,000 won ($5.55) and is available online through Kyobo Book Center.