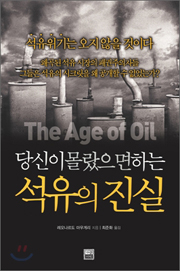 It is the era of high oil prices. Some are even whispering that we are in the middle of a third oil shock. Countries like Korea that don’t produce oil might well feel more insecure, but Leonardo Maugeri, head of strategy and development at the world’s sixth largest resource company, Eni of Italy, isn’t overly concerned.
There will be neither deficit of oil nor any oil crisis,” he writes in “The Age of Oil: What They Don’t Want You to Know About the World’s Most Controversial Resource,” translated into Korean by Choi Jun-hwa.
First of all, the estimated volume of fuel reserves is wrong, Maugeri argues. He points out that the Kern River Oil Field in California, discovered in 1899, had a reserve of 540,000 barrels in 1942. Yet, 86 years later, the remaining fossil fuel amount was discovered to be about 9.7 million barrels. With the development of new technology, one is able to extract more fuel than ever before, Maugeri says.

Another argument is that oil lost from the purification process has decreased significantly. Paradoxically, the sudden rise in fossil fuel prices has triggered the increase of fuel reserves.
In addition, synthesized, medium-quality crude oil and bituminous coal are not included in the current estimations of fuel and several countries are developing alternative energies.
The author claims, “Mankind is only producing 30 percent of the known sedimentary rock floor that contains fossil fuel, and the remaining area that can be developed with latest technology is about 39 percent of the entire sedimentary rock floor area.”
Maugeri adds that “We can worry about fossil fuel drying up, but we do not have the scientific evidence to claim so.”