‘Pesthouse’ puts plague upon the U.S.

‘Pesthouse’ puts plague upon the U.S. 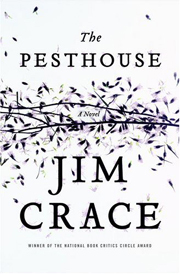 Jim Crace’s latest novel “The Pesthouse” begins with an opening line that would cut short most fiction: “Everybody died at night.”

Actually, Crace is wrong. Not everyone dies. The opening line should be “Everybody who died died at night.”

But let’s not quibble. In Crace’s post-apocalyptic vision of an America gone very, very wrong a lot of people get snuffed out.

For reasons the English novelist never fully explains, the U.S. is no longer the wired, industrialized nation of the 21st century.

Instead, it’s been thrown back into a medieval world of strange religious cults, donkey-drawn carts and grim diseases.

Franklin and his brother Jackson have joined the Great Migration East in search of a better life, but Franklin injures his knee and has to rest.

Jackson forges ahead to Ferrytown where the two siblings hope to cross the river and continue their journey.

In search of shelter, the hobbling Franklin stumbles across a pesthouse where a redhead called Margaret has been consigned. She is showing early signs of the plague.

Bravely, or perhaps stupidly, Franklin stays with Margaret since the pesthouse, he reasons, offers some protection against marauding vagabonds. Forced to choose, I’d opt for a mugging at the hands of vagabonds over a night with Black Death, but that’s just me.

Still, by rooming with Margaret, Franklin survives a nasty incident. The land near Ferrytown emits a toxic burp that wipes out every living creature in Ferrytown, including Jackson and Margaret’s family. Margaret and Franklin survive and so begins their adventure.

How does the story sound so far? Well, by this stage of the book I was completely disengaged. I was a fifth of the way through and I felt like quitting.

I felt no sense of horror or loss about the destruction of civilization and I cared little about the two central characters. They are oddities from a fable rather than people I could relate to.

The novel’s weakness is that Crace dwells on the themes of sickness and decay at the expense of padding out his characters. For instance, he clucks on about Margaret’s sickness in great detail but I got no sense of the person who is actually suffering.

“She’d vomited all day, she’d had diarrhea, she’d shivered like a snow fly but was hot and feverish to touch, she’d coughed as dryly as a jay, there were rashes on her face and arms… .” Etc.

It’s interesting to compare Crace’s novel with Cormac McCarthy’s Pulitzer-winning “The Road.” Both stories emerged over the past two years, both deal unveil a world hammered back a few hundred years by forces unknown and both tell the story through two people struggling to survive a breakdown of civilization.

But The Road is a far more harrowing story, one that engages with a greater sense of immediacy.

McCarthy tells his story through the relationship of a dad and his son. The dad is clearly dying but he never loses sight of “carrying the fire,” the essence of life. His sole aim is to keep his child alive.

But the unlikely relationship between Franklin and Margaret in The Pesthouse has no emotional appeal. Their slightly oddball jaunt dawdles over the course of the narrative, and to be honest, I couldn’t care less about them.

I’m no expert, but there’s something to be said for using fully rounded characters in fiction.