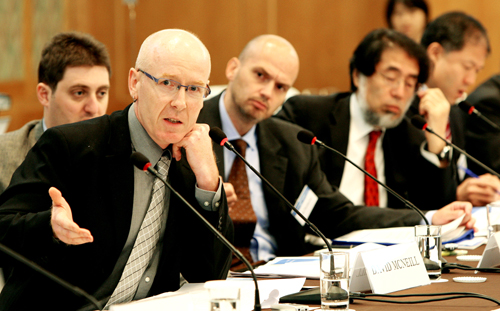 David McNeill, Tokyo correspondent of The Independent, asks a question after a keynote speech by Wang Jisi, dean of the School of International Studies, Peking University, at the forum yesterday held at Shilla Hotel in Seoul. By Park Jong-keun

I acknowledge the support and strong interest of the editors and journalists from the Asia and Pacific region. I also agree with those who suggest that the media is the “fourth” branch of government, a branch which plays a critical role in shaping our views and understanding of the world in which we live. Without the media, this forum would not be possible.

In 1988, when Seoul hosted the Summer Olympics, I led the first delegation from American Samoa to ever participate in the Games. While we did not win any medals, we appreciated the hospitality and friendship that was extended to us by the Korean people.

On the upside, according to the U.S. Trade Representative’s Office, over the last 20 years, U.S. trade with Asia has almost tripled from $300 billion to over $1 trillion per year. It is expected that China will soon be the number one trading partner with all countries in the Asia-Pacific region as well as the rest of the world.

Although the U.S. has always remained a regional and economic power in Asia, its power has declined, for example, with the growth of China, India and Japan, and with the Asian countries’ ability to trade more among themselves.

After the success of the Democratic Party in the 2006 elections, I was fortunate enough to be selected by my colleagues to be the chairman of this distinguished subcommittee. In the 110th Congress, the subcommittee has been proactive on many issues affecting the Asia-Pacific region. From the impact of climate change on vulnerable communities, to the U.S. responsibility to victims of Agent Orange, or to the strategic alliance between the U.S. and South Korea, the subcommittee has had the opportunity to assess and evaluate U.S. policies.

If the U.S. continues to neglect its relationships, especially in the Asia-Pacific region, we can be assured that our standing as a world leader will continue to deteriorate. At this point, I believe we are barely holding onto our relationships that were forged during the Cold War, and before.

When it comes to the 38th parallel demilitarized zone that now separates the two Koreas, I am often reminded of the Berlin Wall that divided the capital city of both East and West Germany.

Though not entirely the same, the case is similar in that a nation of people were simply divided because of the ideological differences between the U.S. and the Soviet Union soon after the surrender of the Axis powers at the end of World War II.

The end of the Korean War was marked by the 1954 Mutual Defense Treaty, an important alliance between the U.S. and the Republic of Korea where they would jointly assist in resolving international disputes and would consult and aid one another when either country is attacked or threatened. Under this treaty, the Republic of Korea government granted the U.S. permission to have a military presence in the South.

Today, I believe that the U.S. presence in the Korean Peninsula has motivated North Korea to build up a nuclear arsenal in order to defend itself. The international community is skeptical of the reasons why North Korea has tried very hard in the past to build nuclear arms and I believe that, in part, U.S. presence in the South influenced North Korea’s decision-making, given the history between the North and the South, and global suspicion that the U.S. may have nuclear weapons stockpiled in the peninsula to support South Korea if the South and North were at war.

If the Korean Peninsula is ever to be unified, I personally believe that China will be the key player in facilitating the reunification of the South and North.

With China’s support, I believe that someday we will see South and North Korea peacefully reunite.


*The speaker is the chairman of the House subcommittee on Asia, the Pacific and the Global Environment, in the U.S. Congress.