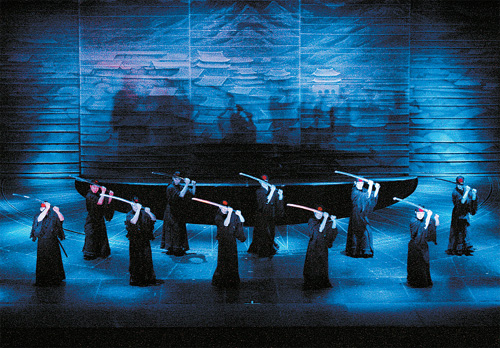 Moments before the scene of Queen Myeongseong’s assassination at the hands of Japanese agents in the musical “The Last Empress.” Provided by the organizer

Queen Myeongseong is still making history even though she has been dead for more than a hundred years.

“The Last Empress” claims to be a historically accurate portrayal of the queen and her life, and it has set new standards for Korean musicals.

Since its debut in 1995, which was the centennial of the queen’s death, the show has sold more than a million tickets, a record it broke in March last year.

It is also Korea’s first original musical production and the first Asian musical to be presented on Broadway and in London’s West End. 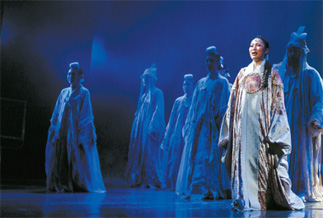 A scene from “The Last Empress,” Korea’s first home-grown musical and a hit in London and New York.

It played at the New York State Theater in 1997 and the Lincoln Center in 1998, receiving favorable reviews.

“We believed our musical has contributed to letting the international community know about the queen and her tragedy, and we think it has corrected some misconceptions about her that are held by some Koreans,” said Yun Ho-jin, the show’s director.

But there is one place that the musical has yet to step foot: Japan.

The production company has been trying to debut there for some time now, but to no avail.

“Several Japanese and Japanese companies have watched our show and showed interest. Talks have got under way, but they haven’t gone anywhere,” said Park Jong-hwan from the PR division of the production company.

The company was never really told the exact reason, but it assumes it’s because it deals with such a sensitive historical issue.

“But we are going to keep on trying,” Park said.