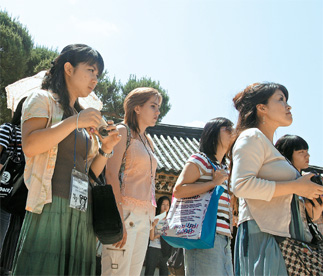 Visitors to the memorial site for Queen Min listen to the tour guide. Provided by the organizer

“I know it was the will of heaven that I should be queen. I am willing to bear the burden, but won’t someone bring me a light and illuminate my darkest night?” she sang.

In the aria, “My Darkest Night,” the queen has a premonition of her imminent death and sings of her difficult years as the queen of a troubled nation. 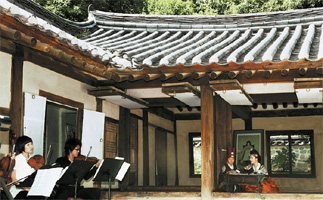 Actors perform highlights from the musical “The Last Empress” in the house where the queen was born. [JoongAng Ilbo]

Japanese assassins murdered the queen on Oct. 9, 1895 in her residence in
Gyeongbok Palace as part of Japan’s plans to seize control of Korea.

Juilliard School graduate and Olivier Award nominee, Yi has played the ill-fated queen hundreds of times over the last 13 years in the long-running musical “The Last Empress.”

But she picks the performance last week as one of the most special. She got to perform at the house where the queen was raised until the age of 8.

The historic house is located in Yeoju County, Gyeonggi, about a two-hour drive east of Seoul. 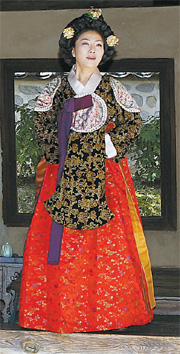 Yi Tae-won as Empress Myeongseong in the musical performed at Yeoju. Provided by the organizer

“It felt like the spirit of Myeongseong had come down on me,” Yi said after finishing the emotional song. “Being here makes it so easy to empathize with the queen and play her character.”

The performance was part of a special one-day tour to Yeoju called “A walk through the life of Queen
Myeongseong” organized by Acom International, the production company behind the musical, and the Korea Tourism Organization.

The tour was a sequel to a similar event held last November that marked the restoration of the Geoncheonggung Residence in Gyeongbok Palace where the queen was killed.

The Yeoju tour celebrated the end of a 13-year project aimed at setting up a memorial village where the queen grew up.

Gamgodang, the queen’s house, was originally situated in Jongno, Seoul. The queen was born in Yeoju County but moved to Seoul when she was 8. Her father died and she went to live with relatives.

Yeoju County officials have been working for over a decade to create a holy ground dedicated to the queen, a project that was completed in early August this year when Gamgodang opened. The residence was moved plank by plank from the capital to Yeoju.

The tour took tourists to the nearby Namhan River and Silleuk Temple as well as the former royal residence where excerpts of the musical were performed.

The 32 participants on the Yeoju tour came from Korea, Japan, China, the United States and France, among others, and were mostly students in their 20s and 30s.

Interestingly, given the story of the queen’s death, about half the foreign participants were from Japan.

“The story of Queen Min is the story of Korea and Japan,” said Park Jong-hwan from Acom. “It is important for both Koreans and the Japanese to know what really happened in history and feel it in their hearts.”

The organizers put up the announcement on Web sites and at youth hostels and language institutes frequented by Japanese visitors.

During the 20-minute musical performance, the audience crammed into Gamgodang’s front yard.

Temperatures soared to 30 degrees Celsius (86 degrees Fahrenheit) and there was little shade. The seats were uncomfortable and there were no audio, visual or special effects.

But that didn’t detract from the power of the story.

“I came without much thought, but I was deeply moved,” said Shin Dae-hyo, 40, a Korean resident in Japan who came with his Japanese wife.

“I know about the queen, but it’s overwhelming to watch such an artistic portrayal in this historical setting. It was a lot to digest.”

Shin, who claims to be a descendent of independence fighter and well-known historian Shin Chae-ho, said the majority of Japanese people don’t know what their ancestors did to the Korean queen.

“I don’t think they should be punished, but I think they need to be told the truth, generation after generation,” Shin said.

Sachiko Chohraku, 35, came to Korea in March from Kagoshima in Japan. She became so interested in the country and its culture after listening to Korean pop music that she’s now studying Korean by herself.

“I think I might have read about [the queen] in books, but I don’t know much,” Chohraku said in slow but articulate Korean. “I wasn’t able to understand every detail today, but I got a sense of the sorrow and struggle from the musical.”

Kaori Murakami, 23, said she felt she had learned something about the Korean side of the story.

“History education in Japan is mostly about Japan, and not much is taught about other countries, including Korea,” Murakami said. “I’ve never heard about Queen Min before. But being here at her birthplace, it helped me picture her.”

Murakami is studying Korean at the Sungkyunkwan University Language Institute in Seoul.

Some of the visitors were reminded of other female leaders from their own culture. “I was reminded of similar women in Chinese history,” said Li Lin, a 22-year-old student from China.

She said she hadn’t known Korea had been ruled by a queen who was as powerful as a male ruler and who dedicated her life to her country.

Robyn Shultz from the United States felt that the queen was a progressive who had an eye on the future.
“The queen seemed to be ahead of her time. No wonder she’s still revered by Koreans,” Shultz said. “I actually copied down one of her governing policies from the memorial hall.”

The saying, which was inspired by Confucian teachings, read, “The people are the root of a country and when the root is firm, the country is tranquil.