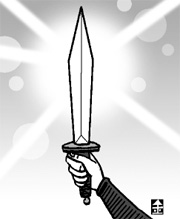 “The Divine Weapon (Singijeon),” a Korean film directed by Kim Yu-jin, will have its premiere on Thursday. Singijeon was the world’s first multi-launch rocket system made during the Joseon Dynasty under King Sejong. Thanks to this secret weapon, Joseon was feared as a powerful state at the time.

Damascus swords are also considered one of the world’s most mysterious weapons. Made in Syria using imported Indian steel, the swords are believed to be the strongest swords ever made in history.

Owing to the Damascus swords’ reputation, the Roman army didn’t dare attack the Sassanid Empire. Even an entire army of European Crusaders were defeated in Jerusalem by Arab armies led by Saladin.

In contrast, European swords from this period were bulky and dull in comparison. They were no match for Damascus swords, famed for their lightness and sharpness. Historical records even describe Damascus swords cutting enemy swords in two and penetrating armor.

Damascus swords feature a beautiful pattern of lateral bands, often called “Muhammad’s Ladder,” which is most likely formed by cutting or forging notches into the surface of the ingot, then forging it into the shape of a blade.

Despite its beauty, however, the manufacturing process was horrible. As written records describe, “The blade was heated until it turned a peach color like the king’s clothes, and then cooled by inserting it into the muscle of a healthy slave. So a sharp, strong sword was created from a slave’s power and soul.”

The swords are so rare now that we are practically unable to find any traces of them. By the 1750s, Indian iron resources dried up, creating a sense of intrigue and curiosity that exists to this day.

Modern scholars of metallography categorize Damascus swords as carbon alloys containing a minimum of vanadium and molybdenum. They suggested that the combination of these impurities with carbon greatly contributed to increasing the degree of strength.

However, a discovery published two years ago in the science journal Nature caused a stir. Using electron microscopes, scientists at the Technical University in Dresden, Germany, discovered carbon nanowires and nanotubes within the molecular structure of a Damascus sword.

And so a mysterious 800-year-old sword was found to contain high-tech new materials.

In Singijeon and the Damascus swords we can find new dreams and hopes.