A stroll down memory lane with pianist Yuhki Kuramoto

A stroll down memory lane with pianist Yuhki Kuramoto 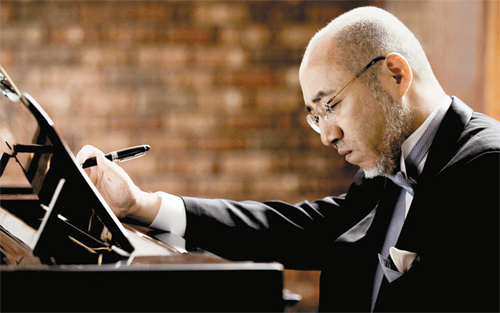 Japanese new age artist Yuhki Kuramoto is on a nationwide tour in Korea themed “Memory of Love.” It is his eighth visit to the country since 1999. Provided by the organizer

Take a journey this fall with Japanese pianist, composer and arranger Yuhki Kuramoto through over 20 years of easy-listening music and fond memories.

“The future is mere fantasy as it hasn’t materialized yet,” Kuramoto wrote in the preface of his latest album, “Piano Nostalgie,” released in May in Korea in celebration of his 20-year career.

“But the memories and experiences past are surely the truth ... The moment you feel nostalgia for the past, the past is no longer the past but is reborn as the present. I often feel nostalgia when making music or playing the piano.”

Kuramoto is one of the most popular new age artists in Korea, along with Andre Gagnon, George Winston and Richard Clayderman. Like many of his counterparts, Kuramoto offers a sense of restfulness and tranquility to busy, modern-day people with lyrical melodies that reflect on nature and the seasons.

But what differentiates Kuramoto from the pack is that he never studied at a prominent conservatory.

A Tokyo Institute of Technology graduate, he attained most of his musical talent and knowledge with pure passion and self studies into different genres of music.

And perhaps it’s precisely that nonmusical background that helps him create music that so many people can easily appreciate.

Kuramoto has embarked on a nine-city tour in Korea, themed “Memory of Love.” He has chosen a topic that everyone can relate to pretty effortlessly, just like his music itself.

At the upcoming Seoul concert, Kuramoto will perform pieces from Piano Nostalgie, as well as previous hits such as “Lake Louise,” “Romance” and “Memory of Love,” which was the soundtrack for popular epic drama “Jumong,” composed by Kuramoto and sung by soprano Sumi Jo.


Yuhki Kuramoto performs at the Seoul Arts Center in southern Seoul at 8 p.m. this Sunday.

For reservations and other information, contact the concert organizer through www.clubbalcony.com or by calling (02) 1577-5266.