Art that promises to change your life

Art that promises to change your life 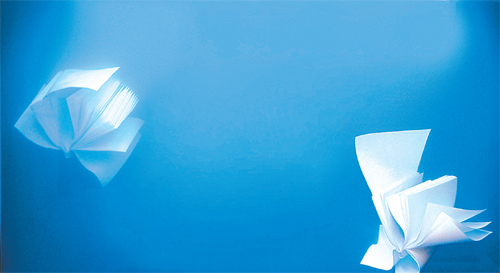 “End of the End,” an installation by artist Rhee Ki-bong. Provided by the organizer

Properties that belong to nature such as fog, dust and water can cast spells, at least to artist Rhee Ki-bong, 51. He believes that ambiguous forms of nature can change how you view objects.

Sounds complex? A visit to his solo exhibition, “The West Psyche,” at Kukje Gallery in Sogyeok-dong, central Seoul, might help you understand.

Nine of his works, including three installations and paintings, are on display until Sept. 29.

One of his recent canvases is “Wet Psyche 1” (2008), an acrylic painting of an abstract green tree amid heavy mist.

“[When they look at the painting], most people focus on the tree,” Rhee said. “But the work is all about the mist.”

The fog changes the perspective on the tree - it can make the tree look further or closer.

The mist creates a new soul and spirit in the painting, according to Rhee, and the viewers’ emotional senses eventually impact life.

“Abstract and ambiguous paintings have the power to create an invisible spiritual energy in the body,” he said.

“End of the End,” an installation, shares a similar concept.

The piece was installed at the ZKM Museum for Contemporary Art in Karlsruhe, Germany, last year, with the title “Bachelor - The Dual Body.”

“The books represent human intelligence and the water, emotions,” said Chris Choi, a director at the Kukje Gallery.

“Human intelligence lies in the brain, a highly mechanical organ in the body,” he said.

“It [the brain] operates under physical law. But when it meets emotions, or water, it creates a whole new sensibility.”

It’s when intelligence meets emotions, creating a fantastical and dream-like world, he said.

“The concept [of water] relates back to the fog,” he said.

“They both help wake inner emotions that were once hidden from reason.”

Rhee entered the public eye when he received the Grand Prix at the Korean Great Art Festival in 1986.

Other collections of his works have been bought by the Ho-Am Art Museum, the National Museum of Contemporary Art and Artsonje Museum, all in Seoul.

In the upcoming months, Rhee will display works at the 2008 Singapore Biennale, which opens on Sept. 16, and at the Kiasma Museum of Contemporary Art in Helsinki, Finland.

To get to the Kukje Gallery, take Anguk subway station, line No. 3, exit 1. For more information on the exhibition, visit www.kukjegallery.com or call (02) 735-9449.