They’re the silent heroes of the film industry, defying death with leaps off bridges and high-speed car chases. But as substitutes in action flicks, stuntmen are always behind the scenes.

No longer. In the recently released independent documentary film “Action Boys,” stuntmen are the heroes.

“Many people think that stuntmen lead gloomy, miserable lives,” said director Jung Byung-gil, “so I wanted to tell the world that their lives are cheerful and bright.”

Jung himself was an action substitute before he became a director in 2005. 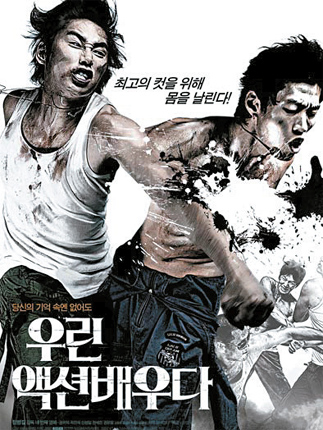 The documentary film “Action Boys.” Provided by the organizer

Action Boys is based on “Standing on the Edge of a Knife” (2005), a 38-minute documentary Jung made about his fellow stuntman, Tae-yong, at the Seoul Action School in Paju, Gyeonggi. The school trains action substitutes in martial arts.

Although they’re not big-time celebrities in fancy duds glamming it up on the red carpet, their contribution to the big screen is immeasurable.

The five have worked on 100 projects, including films “The Good, the Bad and the Weird,” “Dachimawa Lee,” “Seven Days,” “The Show Must Go On” and “Public Enemy 2,” and the TV dramas “On Air,” “Air City” and “Immortal Admiral Yi Sun-shin.” They mostly stepped in for hard-core action scenes involving gangsters or soldiers.

Kwon Gui-deok, for example, played a man falling into the Han River as the monster appears in “The Host.” It’s almost his signature role - he performed a similar stunt falling from a horse in the recent TV drama “Four Legends of the Great King.”

Shin was the standing substitute for Park Shin-yang in the drama “War of Money.” His dream is to become an action star like Bruce Lee.

“Action Boys captures all the tribulations of being a stuntman,” Jung said.

Scenes include over 30 takes of hanging on a high wire until they receive an O.K. sign from the director, and being trapped inside a car.

Broken bones are par for the course in this profession, “but I don’t want viewers to feel sorry for them,” Jung said. “Instead, I want viewers to see the endless dreams and passion that these youngsters have for life.”

Jung, 28, is one of them. Despite running into budget problems, he never gave up. The documentary, which he began planning in 2005, took 18 months to film 300 60-minute tapes and four extra months to edit.

The production cost of 30 million won ($27,000) was supported by the Korean Film Council and Culture Planet Sangsangmadang, a multidisciplinary arts center.

“It will make you laugh and cry,” said Jung Mu-gyung, the project manager at Culture Planet Sangsangmadang, the film’s distributor.

“Documentaries aren’t boring - you just have to see before you judge,” Jung, the director, said.

“Action Boys” is playing in 14 theaters in Seoul including CGVs Sangam, Gangbyeon, Apgujeong and Daehangno, and Indie Space.