Puppets, plays and the people of Vietnam

Puppets, plays and the people of Vietnam 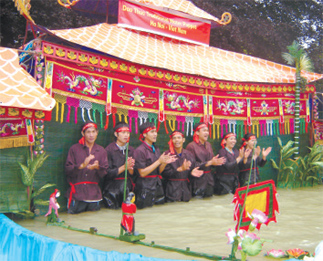 A water puppet show performed by the Than Long Water Puppet Troupe. Provided by the organizer

Puppet shows may be common, but it’s not every day that we get to see them splashing and diving in and out of water.

Which is why if you’re looking for something unusual to keep your kids entertained, a water puppet show might be just the thing to keep those temper tantrums at bay.

The National Museum of Korea will be showcasing a variety of Vietnamese traditional cultural performances in a three-day event titled “My Friend Vietnam” from Sept. 5 to 7.

This initiative is an attempt to provide an in-depth look at the history, culture and folk customs of Vietnam.

The organizers have planned several family-oriented shows, the highlight of which is the water puppet show by the Than Long Water Puppet Troupe.

This unique show provides a glimpse of Vietnamese agricultural life, and requires the performers, who are behind a screen, to stand waist-deep in the water, which acts as the stage.

The Than Long Water Puppet Troupe will give six performances between Sept. 6 and 7.

If you’re more of a romantic, a theatrical performance of a Vietnamese fairy tale similar to “Cinderella” is a great way for the entire family to experience something different. “Thom and Kkham” will be performed three times a day from Sept. 6 to 7.

For a more in-depth understanding of Vietnamese culture, two lectures featuring Korean experts on Vietnamese culture and history are planned for Sept. 5. Yoo In-seon, formerly of the department of Asian History, Seoul National University, and Chun Hye-kyung from the Vietnamese language program at Hankuk University of Foreign Studies will share their knowledge on their area of expertise.

In an effort to bridge the gap between the two cultures, organizers have also prepared brochures in Vietnamese of exhibitions at the museum.

In a statement, the National Museum of Korea said it recognizes the importance of such cultural events and plans to organize similar events featuring different cultures in the future.