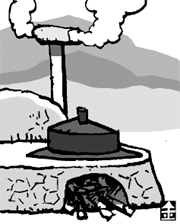 Ever since humanity discovered fire and cooking, chimneys and fireplaces have been closely related to people’s lives. Many idioms and old stories about chimneys and kitchens have survived to this day.

The master of the house, however, didn’t heed the man’s advice and another fire broke out. With the help of his neighbors, the master was fortunately able to extinguish the fire. In appreciation, he threw a party for those who helped. A neighbor who got burned in the fire was the guest of honor, with the others taking up seats according to merit.

It was then that someone asked the pertinent question, “Why didn’t you invite the person who told you to fix the chimney?” Pondering this, the landlord finally realized that if he had listened to the man, the house wouldn’t have caught fire.

This Chinese proverb from Hanshu is often interpreted as a call to prevent disaster before it happens. But if we look closely, it encompasses many teachings. It is the story of a person’s stupidity in not being able to tell the obvious road to take or a household head’s foolishness in taking care of secondary matters and missing the real problem.

In responding helplessly to the candlelight vigils, the Blue House did exactly that. It has now explicitly shown religious bias, stirring up the Buddhists, without any countermeasure.

The Blue House ignored both law and norms with regard to the candlelight vigils as with the Buddhists’ discontent. It did not react properly to the illegal rallies, showing incompetence and displaying religious discrimination that civil servants should avoid. Then in the wake of the Buddhist anger that followed, it did not apologize in time. In addition, to protect the national police chief who got his hair burned while trying to extinguish the fire, the Blue House closed its eyes to his religious behavior, inappropriate for a civil servant.

The government should simply bend the chimney and remove the firewood, but it is clueless. This government cannot tell the right road or it is ignoring it. If its popularity rises, it would be quite strange.