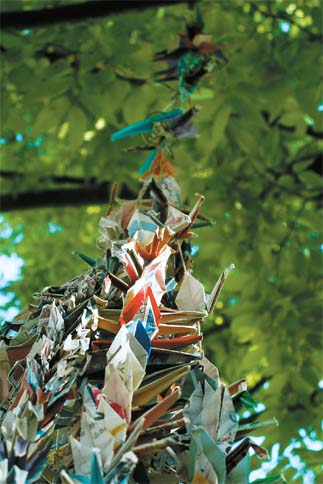 HIROSHIMA - The signs in English are pointing to the streetcar that goes to the Atomic Bomb Dome and the Peace Memorial Museum.

Arriving as a tourist to Hiroshima, these are the most likely places to visit. You come to see the traces of the atomic bomb that detonated over the city in the early morning of Aug. 6, 1945.

I first encountered Hiroshima when I was very young. In my hometown in Sweden, I read “Sadako and the Thousand Paper Cranes” by Eleanor Coerr with a mixture of fear and fascination. A bomb had been dropped over Sadako’s city on the other side of the Earth, killing an unthinkable number of people, and somehow kept on making people sick.

I learned that it was called radiation and that Sadako was suffering from leukemia. In her hospital bed, she was folding paper cranes, believing that, just as the old legend says, if she’d managed to fold a thousand her deepest wish would come true. 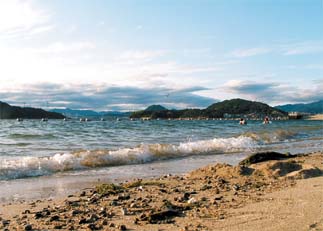 When I first stood at the train station in Hiroshima looking at those signs in English, the only connection I had to the city was Sadako’s story. But I couldn’t stop thinking that Hiroshima couldn’t only harbor memories of the atomic bomb.

Hiroshima had to be a city where people grew up, had dreams, hung out and fell in love, just like any other city.

If you didn’t know, you wouldn’t know. Hiroshima is like any modern city. There are department stores, arcades and restaurants. There are office buildings, schools and parks.

Even a daytime visit to the Atomic Bomb Dome, a building that survived the blast because the bomb exploded right above it, seems almost tranquil. 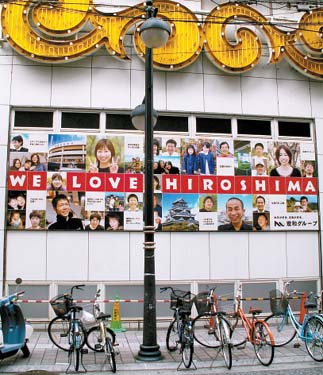 Bikes are the best way of commuting. All photos by Ida Grandas

Tourists snap photos of each other in front of the dome as they do with any tourist attraction.

Trying to get away from the tourists, I found a small monument close to the river. I sat down close to it and looked over the pieces of art that were set around the monument.

There were paper cranes with colorful messages that read “love” and “peace.” 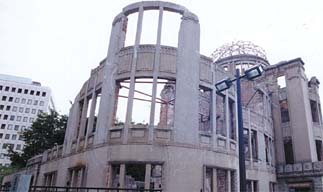 The A-bomb Dome is a Unesco World Heritage site. All photos by Ida Grandas

While sitting there, a man came to the monument. He bowed and then started to cry, leaning against a tree.

Sadako never managed to fold 1,000 paper cranes. The last one she folded before she died was number 644.

She wrote the word “peace” on the last one, wanting it to fly over the world and tell the story about Hiroshima so that nothing similar would happen again. 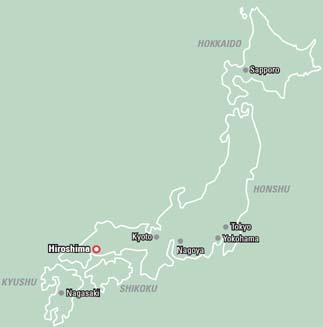 Several speeches are held, and the mayor of Hiroshima reads out a statement for peace that urges the world never to use nuclear weapons again.

The paper cranes are put around a statue of Sadako.

During the Peace Memorial Ceremony, Hiroshima is crowded and much of the accommodation is full.

Reservations are booked up a year in advance. Hiroshima is trying to get around the problem, setting up a “Peace Camp” where visitors can stay for free during the week of the ceremony.

Even if Hiroshima carries memories hard to understand, the city is alive right now and has many things to offer.

Walking around the city streets, you are always close to the water. The city was built on the delta of the Ota River.

There are plenty of riverside walks where you can watch the trees brush their branches against the calm waters of the river.

The streetcars will take you to Hiroshima Port where the Ota River flows into the Inland Sea.

There, you can take ferries to nearby islands where you can bike, hike or just spend a day on the beach.

If you want to get to Miyajima, it’s best to take a ferry from a special port in Miyajimaguchi.

The site dates back to 593 C.E. and it’s famous for its red torii, a traditional Japanese gateway at the entrance to a Shinto shrine located in the sea.

During low tide, you can walk to the gate.

People in Hiroshima seem to love baseball. The Municipal Baseball Stadium is located close to the Atomic Bomb Dome, and when there is a game, you can hear the sounds and see the bright lights from all over the city.

Hiroshima’s home team is the Hiroshima Carp, named after the fish that started to swim in the Ota River soon after the bomb.

People in Hiroshima are also proud of their okonomiyaki, a kind of Japanese pancake.

The okonomiyaki you usually get outside Japan is the one that originates from Osaka, but the Hiroshima style differs.

The dish is made in layers, the first one being a pancake made of flour, followed by a layer of fried cabbage and noodles topped by fried egg. The price starts from 700 yen.

In the evenings, most parts of Hiroshima turn silent, but you can find rows of small restaurants and bars along the narrow streets of Nagarekawa District.

Here, you can spend the night in an izakaya, where you can sample locally produced sake, or go wild in a karaoke bar.

While I was in the city, I checked out the Hiroshima City Museum of Contemporary Art.

A friend took me there to see the film “200,000 Phantoms” by French artist Jan-Gabriel Periot.

The film comprises photos of the Atomic Bomb Dome 1914-2006, following the city through development, destruction and reconstruction into the vivid city it is today.

After we watched the film, my friend and I stumbled into the bright lights of the foyer only to find the director Periot standing in front of us. Over coffee, we talked about how the film came to be made. The Frenchman said Hiroshima has an intangible spirit that drew him into the project.

“Cities like Hiroshima always give me a special feeling,” the artist said.

Having spent time in Hiroshima, I know that special feeling Periot was referring to. It is hard to find it at the Atomic Bomb Dome among all the other tourists.

You need to take the streetcar in the opposite direction to the route marked on your tourist map. You need to spend a night in an izakaya. And you need to learn how to fold paper cranes.

In my notebook, I jotted down some words I heard in Hiroshima.

“Hiroshima is beautiful because people survive,” it reads.

Getting there and getting around

You can also get to Hiroshima by train or bus from Busan, and then a high-speed ferry (www.jrbeetle.co.jp) to Fukuoka. A one-way trip on the ferry costs 13,000 yen ($120). From Fukuoka, take a train or a bus to Hiroshima.

For information about Hiroshima, its history and general tourist information, try www.city.hiroshima.jp, which is run by the city government.

For a hipper perspective on events, restaurants and bars, check out www.gethiroshima.com. This Web site also contains information about day trips to one of the islands off Hiroshima, baseball games and the people living in Hiroshima.