How children see the world

How children see the world 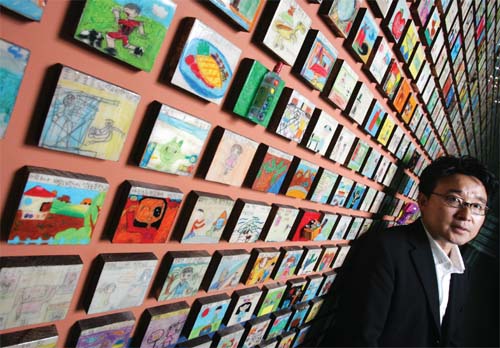 Artist Kang Ik-joong with his installation “Wall of Hope,” a mosaic of artwork by 50,000 children. By Jeong Chi-ho

Artist Kang Ik-joong is a man of compulsive habits, and he admits it. Every morning at his New York home, he picks up a newspaper, goes through the news summary, and memorizes each word on the page. He’s been doing that for the past 20 years to keep himself updated with the current state of the world and to improve his English skills.

He collects obsessively and counts and plays with the visual significance of scale.

In “8,490 Days of Memory,” Kang installed a statue of General Douglas MacArthur behind a spectacular mosaic made of 8,490 chocolate bars, which reflected the number of days the artist had lived in Korea before he moved to the United States.

Each bar touched on snippets of his memories as a child growing up in a war-torn country, where American GIs shared their chocolates with local kids, and the land of the heroic general meant sweetness and an absolute savior from communist invasion. 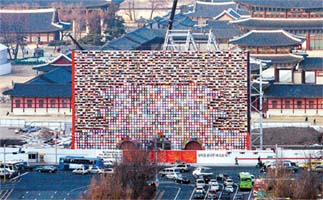 For those only swayed by credentials, Kang is the creator of “Mountain-Wind,” an installation made up of 2,611 painted wooden panels and adorning the facade of Gwanghwamun gate in central Seoul, which is currently undergoing major restoration.

He represented the Korean pavilion at the 1997 Venice Biennale; his works are permanently installed at major public sites including San Francisco International Airport and Flushing Main Street Station in New York.

His success story is a legend among many Korean-American artists who are struggling to juggle their survival and artistic careers in the wild jungle of the New York art scene.

“I still eat the same food,” chirps Kang, shying away from a question about his advanced status in the art world compared to 20 years ago. “It really hasn’t changed that much.” 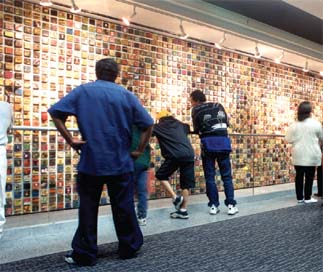 Kang was in Seoul last week for the unveiling of “Wall of Hope,” a giant mosaic done in collaboration with 50,000 South Korean children, at the Gyeonggi Museum of Art in Ansan. The work resonates to the 48-year-old artist; a significant part of the installation was contributed by the children of migrant workers and Korean nationals based in Ansan, a factory enclave.

Kang moved to the United States in 1984, when street graffiti artists like Keith Haring and Jean-Michel Basquiat were at the peak of their fame. Kang graduated from Hongik University, a prestigious art school in Korea, but it wasn’t until the early ’90s that the American art world took any notice of his work.

Back then, the artist’s pockets were stuffed with a stash of drawing tools and small 3-by-3 inch canvases. He used them to soothe his long subway rides to the flea market where he worked. 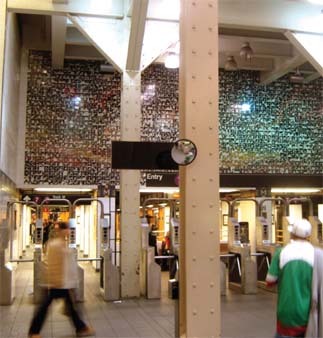 In rare circumstances, he also made lists of personal beliefs, some prosaic, others more profound. In “What I Know 2005” he writes:

- You should never run when there is a disabled person nearby, no matter how busy you are

- When you get lost in the subway, go in the opposite direction of the way you think is right

- Laundry soap makes you itchy although it saves money

Wall of Hope is part of a continuing series of installations involving children. Visually, it is the essence of Kang’s work. In the series, he called for submissions of children’s artworks from schools, orphanages and community centers. The theme: a dream. 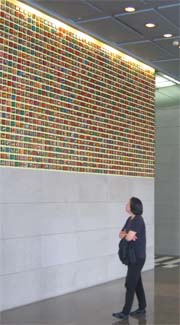 “Happy World” in Flushing, New York. Provided by the organizer

Each day, new works were flown into his studios in Chelsea and Chinatown from all over the world.

A painting of an envelope with a North Korean address was sent to him by a young boy in the South; it turned out to be his letter to his grandmother living in the North.

A child from Iraq sent him a painting of a boy shooting an air-gun in the sky. The bullet was targeting a flying bird named “War.”

A boy from Cuba sent a drawing of two men, an Israeli and Palestinian, shaking hands; a Vietnamese child sent a picture of a family eating.

“It’s an almost like an open textbook,” Kang says. “It’s an encapsulation of their culture, society and religion. You call this the work of a child. But in 1,000 years, this will be a major cultural asset.”

Wall of Hope stretches 64 by 14 meters, filling all of the museum’s two-story wall. The artist used a Google map of the peninsula’s mountains, rivers and islands, including Dokdo, as the backdrop to the mosaic.

Perhaps surprisingly, all 50,000 pieces of artwork were included in the exhibit. One child had fixed a matchbox onto his canvas. After a brief mull, Kang’s assistant took the matches out of the box and slotted them into the mosaic.

“We asked the teachers to send in all of their students’ artworks, even if it was just a dot on an empty sheet of paper,” says Lee Jeong-yeol, Kang’s local assistant, who helped put the installation up in the museum. “We made that very clear so that the teachers’ judgment didn’t get in the way.”

Each of the young participants captures child-like wonder in their ideas; answers are substituted by a picture of a colorful whale, a master of taekwondo, a simple display of Nintendo gadgets laminated onto a sheet of paper.

Personal recollections are common: the children have sent in their first baby shoes, their mother’s lipstick and a Pokemon doll. But not all the children embraced naivete.

Three were blunt slogans carrying the words “MB Out,” a common catchphrase used by local demonstrators in protest against the nation’s current president, Lee Myung-bak. One even had a picture of a machine gun.

On a recent weekday afternoon, Kang counted the number of footsteps it took to walk between his home and studio: 3,628. Despite this obsession with numbers, however, he knows that ultimately it’s not about the heroic scale of the 50,000 participants and 8,490 days he lived in Korea.

“It [counting] makes me nauseous, but I can’t stop,” Kang says, sipping his ginseng juice. “It just allows me to measure the distance of relationships between things.”

From central Seoul to San Francisco


“Happy World,” permanently installed on the mezzanine walls of a subway station in Flushing, New York, plays with the notion of irony.

It puts together 7,000 small paintings on ceramic tiles, each depicting flashes of Kang’s random thoughts on city life: from sex, violence and politics, to the plain banalities of urban living in New York.

The work instills in the viewer a sense of urgency, as it gathers images, words and phrases which the artist collected from public advertisements and floating words across the city. Phrases include “We like Tyson” and “I won’t get you pregnant.”

The installation is meaningful in two ways: first, the work is presented in New York’s second-largest Asian-American neighborhood; and Kang produced each of his paintings on his subway ride to work at a flea market in Far Rockaway during his earlier years as an immigrant worker living in Queens.

“Mountain-Wind” is a public installation work mounted at Gwang-hwamun, central Seoul. The historic palace gate is undergoing major restoration work to restore it to its original pre-colonial structure.

The work, 41 by 27 meters, is made up of 2,611 painted wooden panels, each depicting different shapes such as traditional Korean porcelains and local mountains. As a whole, they create a contour of the original gate.

At the bottom of the work are three smaller gates, from the original Gwanghwamun structure, to which digital prints of paintings contributed by 2,000 children from around the world will be pasted.

The project was donated to the Korean government by the artist; the deal was that the authorities only paid for the cost of the materials, which covered 500 gallons of paints.

“Gateway,” an installation at the departures lobby of one of the international terminals at San Francisco International Airport, is made up of wood carvings and objects that reference the artist’s dreams and experiences living in New York.

“Beautiful Mountains and Rivers,” permanently installed in the lobby of Heunguk Life Insurance Building in central Seoul, is one of the artist’s best-known works among the local public.

The installation, which comprises 7,500 panels, features a giant panoramic view of man and nature. It depicts small paintings of people, flowers, trees and the English and Korean alphabets, and stretches 7.62 meters in length.