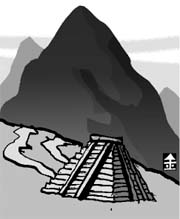 Machu Picchu is one of the most remarkable archaeological sites in the world and also the most popular tourist attraction in Peru, attracting around 2,000 visitors per day. However, its 500-year-old stone steps and granite terraces are being severely damaged and its fortress wall is on the verge of collapse due to the impact of tourism.

Meanwhile the number of tourists visiting Machu Picchu continues to increase. The International Union for Conservation of Nature advised the WHC to consider once again adding Machu Picchu to its list of endangered World Heritage sites last June, insisting that Machu Picchu faces a lot of challenges related to tourism, uncontrolled growth of urban settlements, landslides and fires.

Angkor Wat in Cambodia is another historic site under threat by the sheer volume of visitors - more than 2 million people per year. With its popularity as a tourist spot rising, the nearby town of Siem Reap has experienced an unprecedented economic boom with a number of hotels and businesses sprouting up.

Urban development has also led to a rapid increase in water usage which has resulted in the drying-up of natural underground water reservoirs. The growing concern now is that Angkor Wat is collapsing into the sandy ground. Tourists can clearly see the sinking foundations and widening cracks.

The United States Capitol, as well as the Taj Mahal in India and the Greek Acropolis, are believed to be suffering severe damage from acid rain.

The Bangudae Petroglyphs in Ulsan, the site of substantial engraved rock art, was rediscovered in 1971 and designated as the 285th National Treasure of Korea in 1995.

There are 296 individual petroglyph motifs depicting whales, turtles, deer, tigers, ships, harpoons and fishing nets. However, the Bangudae Petroglyphs are submerged under the Sayeon Dam, and some parts are being destroyed.

The petroglyphs, considered to be masterpieces of prehistoric art and an invaluable source of information, are being left unsupervised without any protection.

If we damage the Bangudae Petroglyphs, we will one day deserve the shame when we face our offspring.