Wedding bells ring the till

Wedding bells ring the till 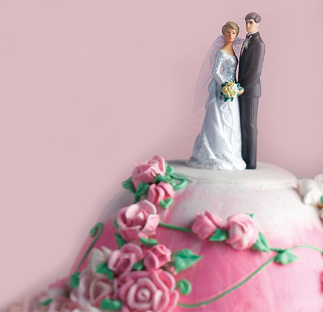 Every bride deserves a magical wedding, but it’s always dark before dawn, as they say, and planning a wedding is always a huge challenge.
Kim Sei-hwa, 27, who’s getting married in two months, is already exhausted.

It’s not easy making even the simplest of decisions like which flowers should be used as decorations.
And the cost is staggering.

In a recent survey conducted by My Wedding, a local wedding magazine, an average wedding costs 186 million won ($164,610), including the cost of an apartment and wedding gifts that the two families exchange.
“There are so many [traditional] rituals before the actual ceremony that involve money,” says Kim Hye-rin, a researcher at Sunoo, a marriage consulting firm.

Sunoo conducts its own survey on wedding expenses once every two years. As of last year, the company estimates that families spend 172 million won on average.

“You no longer find the sacred in the wedding ceremonies,” Kim says. “Instead, they have become an expensive affair in Korea.”
Last month, Kim, the bride-to-be, and her mother-in-law went looking for furniture at a department store.

It’s a custom here that brides buy the furniture for the new family home, which tradition dictates that the groom buys. The furniture is part of honsu, gifts that brides present to their in-laws.

“Some mothers-in-law, not mine, ask for too much,” Kim says, “like high-end bags and mink coats. They think they deserve such quality presents for their sons.”

Some 300 years ago, most marriages were arranged and the ceremonies were sacred.

The groom’s family would send a marriage proposal to the bride’s family, asking for permission.

If the bride’s family sent a letter back accepting the proposal, the two families would set a wedding date. One month before the marriage, the groom’s family would send presents of appreciation to the bride like hanbok, traditional Korean clothes.

On the morning of the wedding, the groom would visit a nearby seodang, or shrine, to bow to his ancestors as an expression of gratitude.

After he got home, he would bow to his parents and then ride to the bride’s house on a horse.

Meanwhile, at the bride’s house, the bride’s family would get ready to greet the groom. They would lay straw in front of the door for the groom to step on, a custom that Koreans used to think would drive away mischievous spirits.
The bride’s family also presented a pair of wild geese made of wood that symbolize a happy marriage.

When the groom and bride met, usually for the first time, they would bow to each other and the celebrations would take place at the bride’s house with all the townspeople invited.

“Some of these traditional aspects can be found in modern weddings but most of the significance has been smudged,” says Ryu Seok-il of the Korea Consumer Agency. He has been looking to recreate a wedding culture that is not overly commercial.

One tradition that has become distorted is the offering of ham, a box of gifts such as a wedding vow penned by the groom, or by his family, wrapped in black silk, a collection of red and blue fabrics and other valuables of appreciation. The night before the wedding, the groom and his close friends visit the bride’s home to deliver the ham.

“The general ritual is simple and frugal,” Ryu says. “But in modern times, the tradition has become a luxury. Some families of the bride expect too much [money or presents], which is one factor that inflates wedding costs.”

The situation was no better several years ago when Ryu published research on extravagant wedding ceremonies.

According to his data, most respondents viewed superficial weddings negatively.

Some 25 trillion won was spent on weddings in 2001 in Korea, according to Ryu’s research, with an average of 75 million won per couple.

“But such once-in-a lifetime extravagance is reasonable,” says Choi Hyung-joo, a newlywed bride who got married in a luxurious art hall in southern Seoul.

“A ceremony is more like a family tie,” she says. “The whole is involved, not just the bride and groom.”
That’s why couples who cannot afford such high expense take out loans for a luxury wedding.

Ahn Kyong-ja, the president of Art Bridal, a house wedding company in Pyeongchang-dong, northern Seoul, has another complaint.
“In modern weddings, the spotlight isn’t given to the newlyweds but on which wedding hall or hotel the ceremony is held at, what food is served and how many came,” she says.

Ahn used to live in Japan, where couples often get married at home. She set up her house wedding company Art Bridal three years ago, hoping to reignite a more sincere wedding culture.
“I was shocked when I went to my best friend’s son’s wedding several years ago,” she says.

“I couldn’t even bless him personally, he was too busy with ceremony events,” she says.

Also, she says, there were too many guests - 500.
“Weddings shouldn’t be used as a way of bragging about how wealthy you are, or used as an opportunity to invite a well-known lawmaker or professor to officiate,” she says. There is too much focus on face and image, she adds.

“Instead, the wedding should be a festival for close friends who truly care about you.”
The house weddings at Art Bridal accommodate only up to 150 guests and the ceremony lasts for three hours, which is longer than the 40-minute events at general wedding halls or hotels.

“I want to present a similar wedding culture and spirit to the past when people close to the bride and groom sincerely blessed the couple,” she says.
“We even urge the newlyweds to reject cash gifts from relatives and friends.”
Despite efforts to reduce extravagance, hotel weddings are still very popular.
Every week, there are at least three weddings held at five-star hotels in Seoul that cost at least 150,000 won per guest.

“It’s been nine years since hotels entered the wedding business,” says Lee Hoon-sik, the senior sales manager of the events team at the Grand Hyatt in Hannam-dong, central Seoul.

Until the summer of 1999, the government officially banned luxury weddings at hotels. But as the domestic economy collapsed, former President Kim Dae-jung allowed couples to hold luxurious ceremonies.

“He [Kim] wanted the rich to spend money and save the economy,” Lee says.

“You cannot generalize any weddings,” says Min So-ra, who married a foreigner early this year. Min simplified any wedding preparations - she prepared no gifts for the groom nor did the groom provide a house.

“Ours was Western,” she says. “We split the expense half and half and didn’t receive any financial support from our parents.” Their expense was 50 million won.

“Weddings should be most practical and real,” she says. “You just have to be who you are, nothing more and nothing less.”