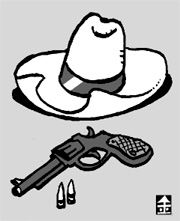 Cowboy flicks have evolved. Starting with Edwin S. Porter’s “The Great Train Robbery”, directors such as John Ford and Howard Hawks have given the world many great romantic westerns with white men pioneering in the U.S. West.

During the 1960s and 1970s, “spaghetti westerns,” made by Italians, appeared, breaking the traditional story of the American pioneering spirit and heroism. While themes of good vs. evil and justice vs. moral obligations disappeared, western movies were suddenly full of dramatic action. Sergio Leone’s 1964 film “A Fistful of Dollars” is a classical example.

Westerns have since largely left Hollywood and the West. India’s “curry westerns” followed by Philippine-made westerns in Tagalog emerged. The “Ostern” genre of movies, made by the former Soviet Union and Eastern Europe portraying native Americans as victims of exploitation, appeared.

Westerns were popular in South Korea as well in the 1960s and ’70s. They were “Manchurian western” action films that took place in Manchuria under Japanese imperialism. Movie viewers indirectly released their pent-up anger through the young men (usually independence fighters) who ran heroically across the Manchurian plains.

Director Kim Jee-woon’s recent popular film, “The Good, the Bad and the Weird” is a cinematic toast to Manchurian westerns. It describes the pursuit of burglars in Manchuria in the 1930s, and is a parody of Lee Man-hui’s “Break the Chain” (1971).

There is now greater interest in Manchurian history. The Japanese established Manchuria between 1932 and 1945 in China’s northeastern region, and it is now emerging as the research nexus of East Asia.

Professor Prasenjit Duara of Chicago University, an expert in Chinese studies, said it was “the country that represents a new form of imperialism.”

It professed to be “five ethnicities in coordination,” among Japan, Joseon, Manchuria, Mongolia and China, but in reality the commander of the Japanese Army was in control.

Each country’s historical interpretation is also different. China remembers it as a history of plundering and aggression, but Japan claims it expedited China’s modernization. In Korea, textbooks don’t even mention Manchuria, erasing it from memory.

Popular movies create an ideal image of Manchuria. To the then Joseon elite, it was a land of adventure and opportunity. While it is questionable whether the movie correctly captured Manchuria, it has definitely brought the past back to the present.