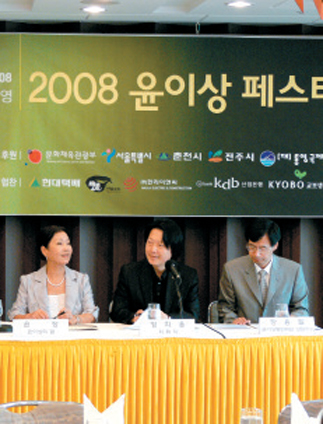 The Isang Yun Festival starts Sept. 17. Provided by the organizer

He was arrested, tried for treason, sentenced to life in prison and eventually given asylum in West Germany in 1969.

But now the life and work of Korean-German composer Yun Isang (1917-1995) is commemorated rather than reviled.

For the past three years, the Isang Yun Foundation has been hosting concerts and symposiums to honor Yun. It also launched the Isang Yun International Composition Prize in 2006.

Yun Isang was born in Tongyeong, South Korea, and studied music in Japan, France and Germany.

But during his studies in Germany in the 1960s, South Korean agents abducted him and his wife, Soo Ya-yun.

Because he had visited North Korea four years earlier, Yun was tried for treason and sentenced to life in prison.

But after international pressure, Yun was released after two years. He returned to West Germany and became a naturalized German citizen in 1971.

“It was such a pity that people are interested in my father more for his political background than for his musical achievement,” said Yun Jeong, the daughter of the composer and the director of the foundation.

“I hope this year’s festival will put an end to such a tragedy and help rising Korean musicians secure a place in the global arena,” she said.


The Isang Yun Festival will be held in Seoul, Chuncheon, Jeonju and Tongyeong over four days between Sept. 17 to 21.