Accidental supermodel beefs up for the New York catwalk

Accidental supermodel beefs up for the New York catwalk 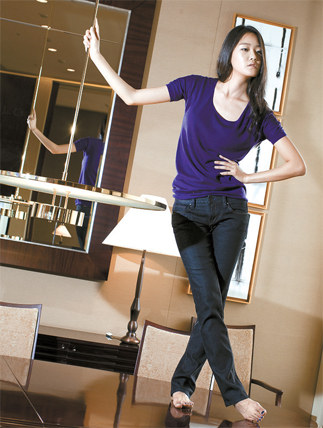 It was the stuff of dreams.

In January, a rare incident occurred at the Ford Supermodel Contest, one of the most prestigious modeling competitions in the world.

The jury selected the first Asian winner in the contest’s 25-year history: Kang Seung-hyun, a 21-year old university student from the modeling department at Dongduk Women’s University in Seoul.

Kang recently arrived in Seoul for a late summer vacation after months spent coping with a hectic schedule in New York.

Asked for tips on how to stay fit, she replied, “I eat anything; there’s no special strategy.”

But she confessed her favorite food was gopchang boggum, or spicy beef intestine.

When asked again for clarification that she is prepared to eat anything, she moderated her position.

“I’m on vacation, but I still try to keep fit by running along the Han River with my winter jacket on,” she said.

Q.Can you define New Yorkers’ style now you are living there as a supermodel?

A.There’s nothing special about it, but New York in an international city. The best thing is so many people from all over the world live there with a distinct sense of taste. They are less keen on trends and have their own style.

What is it like to live as a model in New York?

I have an extremely busy schedule, but it’s definitely exciting, given that the fashion industry is so much more advanced there. More importantly, they have a certain respect for models on photo shoots.

For example, it’s the models, not the photographers, who decide on the choice of music at shoots. Models are not some simple objects in front of a camera; they are seen as individuals. It makes the experience more enjoyable to work on a collaborative project with a great team.

Do you consider yourself a supermodel?

I guess so. I don’t mind being called that. After all, I won a supermodel contest. But let’s be realistic. I am really just a new face in New York.

Are you close to other Asian models working in New York?

I was quite naive to think I could be close friends with other Asian models. I was glad when I met them but they thought I was a threat, which really surprised me. The reality is that the world’s modeling industry is not a place where Asians and Caucasian models compete with equal opportunities. Places and time for the two races are strictly divided. It’s natural that they [Asian models] are hostile toward me at first. Basically Asian models compete for one or two spots at a show by world-class designers. But luckily, I became close to other models from Japan and China who were not hostile to me.

Did you aim to become a supermodel?

No, and I’m serious about that. I signed up for the Korean contest for Ford completely by accident. I was the heaviest I’d ever been in my whole modeling career (Kang started her career in 2003 when she was a high school junior) when I ran for Ford. I didn’t prepare at all. But luckily I won. When I got on a plane to New York, I said to myself, “Wow, I am finally going to New York.” I was thinking of making some model friends from the competition, and finding a pen pal to improve my English when I returned from the trip.

Why do you think you won?

Because I had no ambition. I made my stage name “Hyoni” on the spot at the competition. None of the models I met could pronounce my Korean name properly. So I thought of this name and kept it. I took an English class for about two months before I attended the competition in New York. It’s embarrassing, because I kept repeating the word “thank you, thank you” during my post-victory interview.

What would you say to starting models who aspire to become the next Kang Seung-hyun?

You need courage to become a fashion model in New York. The basic experience of working as a model is the same in Seoul and New York, but Asian models need to be more aggressive. That’s advice coming from many photographers and fashion designers. On photo shoots where you have to play the central role, you have to fully understand your character. When I stand in front of a camera, I try to be as expressive as I can to the point that people see me as a crazy person.