Flying on the wings of history

Flying on the wings of history 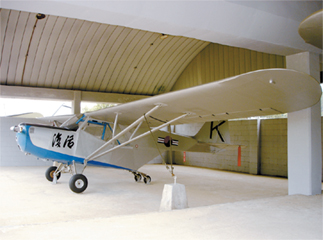 Buhwal, Korea’s first-ever airplane, is being considered as a “registered cultural heritage.” Provided by the Cultural Heritage Administration

Lee Won-bok, 82, has been in love with airplanes all his life. A Seoul National University graduate, Lee joined the Korean Air Force during the Korean War (1950-1953). After retiring as a colonel in 1964, Lee worked for the Korean Air and Experimental Aircraft Association, a Wisconsin-based aviation organization, and taught classes on Korean airplanes at schools and other places.

The love of Lee’s life is an airplane named “Buhwal (Resurrection).” It was his first airplane, and one that’s given him unparalleled joy as well as heartbreak; one that’s been lost and found. Buhwal, built in 1953, is in fact Korea’s first-ever airplane. 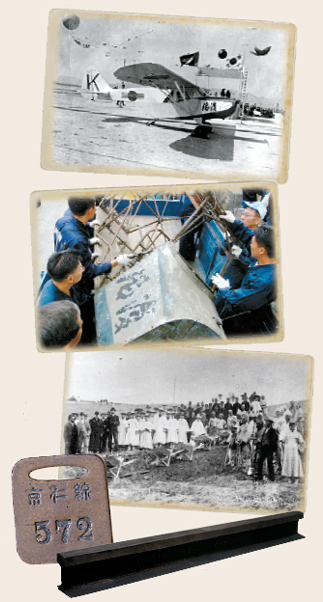 Buhwal in 1954, top; Buhwal in 2004, recovered from a school in Daegu, above center; the ground-breaking ceremony for the Gyeongin Line and the tablet and rail used on the line, above. Provided by the Cultural Heritage Administration

“Back then, no one believed we could build an airplane with our own bare hands,” Lee reminisced. “But we wanted to show that we could and give hope to our country and our people, who were worn out by the ongoing war.”

Lee and his colleagues from the aerospace engineering department at Seoul National University designed the airplane in April 1953, received U.S. components during the summer and completed assembly in October that year. In its naming ceremony in 1954, the airplane was christened Buhwal by former President Syngman Rhee, the name emblazoned across its fuselage in Rhee’s own handwriting.

But Buhwal and its historic significance went missing in the rapid changes that engulfed the country after the war. When Lee came back from a one-year training stint in the U.S., no one knew where the airplane was. He launched a desperate search, but all his efforts were to be in vain.

It wasn’t until 2004 that Buhwal was found, after an article published in the JoongAng Ilbo. It turned out that the plane had been used by Korea Aerospace University since 1955 and then kept in the basement of its annex school, Kyeongsang Technical High School, since the 1960s. Lee and the Korean Air Force rescued and restored it to its original form.

Today, Buhwal is getting ready to make history again. On Aug. 21, the Cultural Heritage Administration announced that it plans to classify Buhwal and 13 rail-related relics as “registered cultural heritage.” If they pass a one-month review, they will be the country’s first aviation and rail-related cultural properties.

“There weren’t many planes like Buhwal. It’s designed specifically for our geography and our purposes back then,” Lee said upon hearing the news. “But it’s also a painful reminder of how neglectful we’ve been. Our aviation industry could have advanced so much. I hope future generations learn from this and never make the same mistake again.”

Buhwal, now back in the possession of the Air Force, can be viewed at the Korea Air Force Academy museum in Cheongwon County, North Chungcheong.

“Buhwal came to life with the hope of our Air Force soldiers who wanted to fly an airplane made by us, decorated with our flag,” said Kim Jong-chool, head of the military history compilation branch of the Air Force history and archives wing. “In that sense, its historic value is immeasurable.”

It began mostly with architectural structures and facilities. It was only in 2005 that movable relics were considered. For that reason, today there are about 390 registered cultural heritage properties, only 38 of which are movable properties. These include a Cadillac used by King Sunjong (1874-1926) during his reign over Joseon between 1907 and 1910, mural paintings in Changdeok Palace drawn in 1920 and early Korean films dating between the 1930s and 1950s.

Coincidentally, Gang’s division has also been working with the Korea Railroad Museum in Uiwang, Gyeonggi, since last year to draw up a list of significant rail-related relics. According to Gang, a steam locomotive at the Demilitarized Zone bombed during the Korean War has been preserved as a cultural heritage property since 2004, but it is classified more as a remnant of war than as a relic that contributed to the development of the Korean railroad industry.

“We will have to wait until the review is over,” said Gang. “But if passed, the 13 rail relics will be the first-ever historic assets in the country recognized for their importance in the history of the Korean rail sector.”

On a recent visit to the Korea Railroad Museum, about a two hours’ drive south of Seoul, the indoor and outdoor exhibition areas were crowded with kindergarten students dressed in bright yellow uniforms on a field trip. Of the 13 rail relics slated to be registered as cultural heritage properties, nine are on display here at the museum. 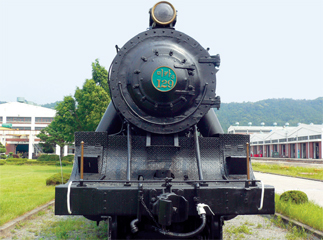 The MIKA steam locomotive No.129.

“As a main artery of our country, our railroads have run vigorously for a century. The footsteps of our iron horse must go down in posterity,” reads a stone monument at the entrance of the museum.

On the right of the outdoor exhibition area stands a special coach used by former presidents. Made in Japan in 1927, the coach was used as a passenger car in Seoul during the Japanese occupation, but was later remodeled to be the presidential coach in 1955.

“We open this coach to public viewing for only one hour a week,” Park Hyo-jin, the curator of the museum. “It’s over 80 years old, and the carpets, fabrics and wooden furniture make it hard to preserve.”

An unpleasant smell of old carpet assailed my nostrils. A foyer with a large table encircled by couches came into view. A narrow corridor led to the president’s room, a conference room, a guards’ room and a kitchen. 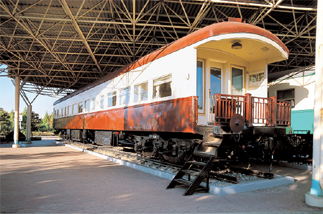 “Records show there were several VIP coaches like these at the time, but today only these two remain,” said Park.

On the second floor indoor exhibition area is another relic that may also become an official cultural asset - part of the rail used on the Gyeongin Line, Korea’s first railroad. The Gyeongin Line, a 31-kilometer (19.3-mile) railroad connecting Chemulpo (now Incheon) and Seoul, was opened on Sept. 18, 1899 by the Japanese.

“The history of our railroads is the history of modern Korea,” said museum director Sohn Gil-shin. “It has progressed with our people, our cities and our industries. Yet, there are few relics left and little is being done to preserve the existing ones.”

“The railway in Korea will be a powerful civilizing force, breaking up the old order based on despotism and ignorance,” a reporter wrote in an article titled “The First Railway in Korea” in Harper’s Weekly on Jan. 29 1898. Sohn has only just obtained the newspaper, and has yet to put it on display at the museum.

“Very few countries on Earth, and none with so long a history and such a long history of writing - with one of the best alphabets in the world - are so rich by nature and so neglected, and even ruined by man, as this peninsula.”