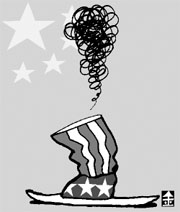 He hung a photo of this company on his wall, boasting that it was the greatest in history. In fact, legendary investor Peter Lynch’s confidence in the Federal National Mortgage Association, otherwise known as Fannie Mae, led him to even write about it in his book, “Beating the Street.”

Billionaire investor Warren Buffett himself had a soft spot for The Federal Home Loan Mortgage Corporation, or Freddie Mac, to the degree that he recommended it as “America’s safest and most profitable company.”

Fannie Mae and Freddie Mac are widely considered similar to the Korea Housing Finance Corporation. They both hit the jackpot based on their easy mortgages, backed by the government’s support.

In 2002, Fannie Mae and Freddie Mac found themselves mired in bad news after trying to hide excessive profits and ultimately had to be investigated for accounting scandals.

Five years later they were in hot water again as the U.S. housing market experienced a rapid decline with decreased earnings.

The U.S. Department of the Treasury, notorious for its two-faced Janus traits, openly pointed the finger at a foreign country in financial crisis. Regarding domestic financial insecurity, they watched with folded arms, afraid of facing a U.S. congressional cross-examination.

The Treasury decided last Sunday to spend public funds of more than $200 billion on Fannie Mae and Freddie Mac, possibly beginning a new measure of nationalization.

Treasury head Henry Paulson explained that it was an unavoidable choice designed to prevent possible chaos in the global financial market. “The bankruptcy of these two giant companies might lead to a collapse of the financial system due to their huge scale,” he said.

But the facts tell a different story. The Treasury insisted on maintaining the status quo.

They awaited the normalization of these two companies while paying emergency funds skillfully.

However, China dealt a knockout blow to such endeavors.

Chinese banks that invested in bonds of the two companies began to flee. They withdrew $4 billion worth of bonds last month.

The significance was not lost on Buffett, who upon hearing the news was quoted as saying, “The game is over.”

The Treasury Department had no alternative left than to stop the escape of foreign funds.

A similar picture was seen in China in 2003, when the SARS outbreak hampered the inflow of overseas capital.

They disposed of state properties by selling them off and took radical measures to open China’s financial market.

The moves were also the plan of last resort. After carefully trying to read the mind of the U.S. Treasury, it took just five years for the Chinese to completely reverse the situation.

America, which has high-handedly dealt with other nations, is now in a pitiful state, while China is wielding strong power.

The global financial market now resembles a battleground, with contending armies precariously perched over a cliff.