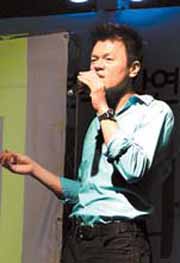 Everything that has a beginning has an end, and hallyu, or the Korean wave, is no exception, according to singer-songwriter Park Jin-young.

“The wave has lost its heat,” Park said at an open lecture at the Sejong Center for the Performing Arts last Wednesday to celebrate Korea’s 60th anniversary.

But no worries, Park assured us, it’s natural that Korean pop culture, such as music, films and television dramas, should lose some ground.

Though pop culture can transcend language barriers, “it faces limits over time.”

Korean entertainment has been big business throughout Asia since the late 1990s when the MBC television drama “Star in My Heart” was dubbed and aired in China.

Ahn Jae-wook and Choi Jin-sil, who played the main characters, were swamped by Chinese fans.

The Chinese media has used the term hallyu ever since, and the Korean wave also engulfed Taiwan, Japan, Thailand and Vietnam.

“But the heat has cooled off,” Park said, “just like Korea no longer looks up to Western popular culture as much as in the 1980s or early 1990s.”

Park still remembers when New Kids on the Block gave their first concert in Korea in 1992.

“They were massive, especially among Korean youngsters - very inspiring,” Park said, closing his eyes as he looked back. “They were very new to us [in the young generation].”

Back then, 90 percent of the Korean music industry was taken up with pop but two decades later a reversal is taking shape.

“Only 10 percent is pop music,” Park said. “Korean people no longer find pop music new. Many are emotionally attached to melodies and lyrics that connect with a shared home culture.”

“The culture gap between Korea and other Asian countries is becoming smaller,” Park said. “Enthusiastic fans no longer find Korean content attractive because their domestic entertainment industry has started to develop its own products.”

Though hallyu is losing its audience, a second boom is possible. Park calls it the Jewish model.

“Many people don’t know that Jews dominate the film industry,” Park said, “which means they have remained a silent force.”

Park criticized the excessive nationalism sometimes expressed in hallyu and points out that the wave flowed only one way, which is why he is trying to champion a new form of hallyu.

“We should produce more films and music in collaboration with other countries,” he said, to create a less “Korean” and more embracing entertainment industry.

Park seems to be practicing what he preaches. He opened a branch of his entertainment company JYP in China, following one in New York. JYP China plans to debut young Chinese singers such as Liu Xin, who is going to have a crack at the United States, China and Korea.