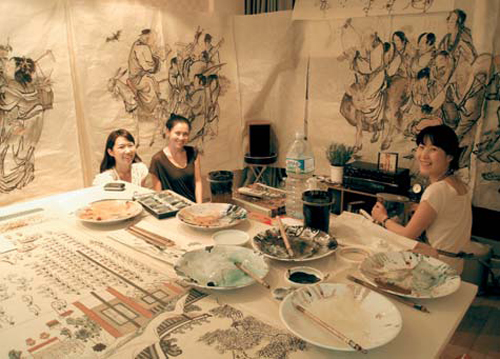 In their atelier in Sinchon, northern Seoul, these oriental painters are busy reproducing masterpieces by Shin Yunbok and Kim Hong-do for the upcoming television drama “The Painter of the Wind.” [JoongAng Ilbo]

In contrast to the restrictions of Joseon (1392-1910) society, their detailed sketches are free-spirited and vividly patterned.

Anyone curious about the works and lives of these two painters can look forward to “The Painter of the Wind,” an upcoming 20-episode drama on SBS TV which will air Wednesdays and Thursdays at 9:55 p.m. from Sept. 24.

Moon Geun-young, 21, plays Shin and Park Shin-yang, 40, plays her mentor, who later falls in love with her.

Though in real life Shin (1758-early 19th century) and Kim (born in 1745) were both men, the historic drama adds a fictitious twist. Shin is a young lady whose father has died under suspicious circumstances, and she disguises herself as a man to solve the mystery. 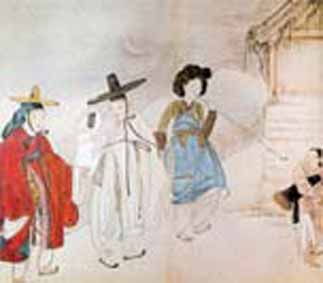 She becomes a member of the dohwaseo, a government-based royal painting institute. Women were not allowed to paint during the Joseon Dynasty.

With Kim’s help, she investigates her father’s death.

In the series, Moon wears gat, a traditional cylindrical hat formerly worn by married gentlemen, and dopo, a gentleman’s robe.

The historic drama is based on an eponymous novel by Lee Jung-myung. The book about the two painters, published last year, was a best seller.

The show’s producer, Jang Tae-yoo, studied arts at Seoul National University, which is partly why he is taking extra care to ensure the accuracy of the paintings by Shin and Kim depicted in the drama. 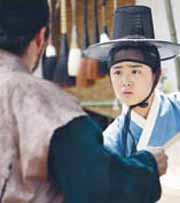 He hired four contemporary painters - Lee Jong-mok, Ahn Guk-ju, Bae Ji-hae and Koo Se-jin - to create reproductions of the Joseon masterpieces for use in the drama.

Theirs is no small task. Among the paintings they are reproducing are Shin’s “Portrait of a Beauty,” “Scenery on Dano Day” and “Lovers under the Moon” and Kim’s “Ssireum (Wrestling),” “Seodang” and “Washing Place.”

Although MBC TV drama “Yi San” once showed snippets of what went on at the dohwaseo, it is this team’s eye for detail that really lend The Painter of the Wind an air of authenticity.

Lee, currently a painting professor at Ewha Womans University, is in charge of the team. She took on the same role for the film “Strokes of Fire” (2002), which depicted the life of painter Jang Seung-up.

“It’s an honor drawing copies of the great masters,” Ahn said. “The more I draw, the more I’m attracted to Shin’s works.”

The team has been working out of their atelier in Sinchon, northern Seoul.

As the originals belong to galleries and private collections all over the country, they based their work off detailed prints.

“Shin’s paintings are so detailed and subtle that it makes me think he was a woman,” Ahn said, pointing to a nude painting as an example.

“Shin’s nude paintings have details that only women would notice.”

Still deeply absorbed in his paintings, Ahn said, “If he wasn’t [a woman], Shin must have either been gay or a man who knew women very well.”

So far, Lee, Ahn, Bae and Koo have reproduced 80 paintings for the upcoming drama, including sketches and patterns drawn on a traditional folding screen and picture books.

Even the smallest painting has been hand-drawn rather than reprinted.

The four painters also stood in as doubles for certain scenes, although “the entire cast and staff received a lecture on painting using a brush and ink,” according to Bae.

“I hope the drama will help many Koreans understand the world of traditional paintings,” Bae said.