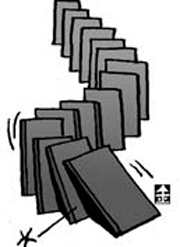 Abbott faced a difficult situation two years later after having invested $200 million to develop the new medicine. Ritonavir’s polymorphs, unknown till then, appeared in a pharmaceutical company in Illinois. (Just like black lead and diamonds, polymorphs refer to crystals that have the same chemical element but different physical structures.) Thereafter, the basic structure of the pills consecutively changed into new polymorphs. The problem was that the new pills are unable to treat the disturbing protein cohesion of the AIDS virus.

Fortunately, the new pill was not discovered at the company’s Italian factory. However, shortly after the Illinois scientists visited the site, the same phenomenon occurred. The microcosmic polymorphs stuck to the scientists’ clothes were the seed. The company had to recall all of the pills produced at the factory during this time.

The chain reaction of spreading new seeds that alter the basic structure brought drastic consequences. The modified prion protein that causes the mad cow disease is another example. It has the same ingredient as a normal prion, but its amino acid crystal structure is different, making it impossible to function properly inside the body. If this goes into the brain, normal prions change into the same structure as the modified ones and cause mad cow disease. Chain reactions can cause problems at the level of an elementary particle.

This story is related to Large Hadron Collider, the biggest scientific experiment in human history to be made today. Protons traveling at the speed of light will collide to create great amounts of elementary particles. Then, a one-in-1,000-chance basic element could stably bond with an atomic nucleus. A feared element of disaster called strangelets will appear to modify all the atomic nuclei it touches, devouring the entire earth.

This catastrophe scenario was presented by Prof. Martin Rees, an astrophysicist. He claims, “We cannot completely exclude the possibility,” but mainstream scientists are rejecting it.

More likely, the Hadron accelerator is likely to bring about other kinds of chain reactions. The purpose of the accelerator experiment lies in finding a Higgs boson particle that defines quality and quantity or supersymmetry bosons that the superstring theory purports.

If we find proof, then our knowledge about the origin of the universe and matter will be rewritten from that point on, like a chain reaction.