Flutes, film and farming for a cheery Chuseok

Flutes, film and farming for a cheery Chuseok 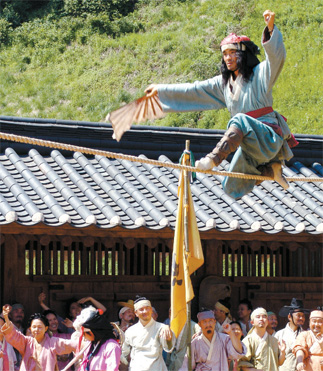 A performer walks the tightrope at the National Museum of Korea in Yongsan, central Seoul, during last year’s Chuseok festival. Provided by the organizer

The economy, the demonstrations and the weather have left Korea feeling a little bleak as of late.

But, no matter, a full moon will rise this weekend and, unless it’s cloudy, illuminate the nightscape.

Chuseok, Korean Thanksgiving day, is coming up and there are a heap of activities to choose from in the capital.
The National Folk Museum of Korea in Jongno, central Seoul, offers lessons on making hanji (Korean paper), danso (a short bamboo flute), tal (a mask), handkerchiefs and folding fans. Materials for these classes cost less than 6,000 won ($5.44) per session.

Another option there is to study a shamanistic ritual dance performed by Kim Moon-ae, a professor of dance at Ewha Womans University.
The National Folk Museum has been inviting foreigners every year at Chuseok since 2000 and teaching them about Korea’s traditional full-moon holiday. 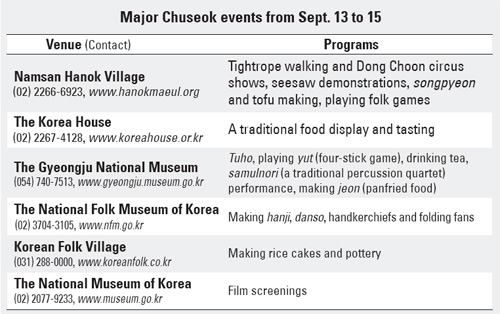 “We invited 40 migrant workers from Ansan Immigrant Center [in Gyeonggi] to celebrate Chuseok with us this year,” said Jang Jung-mi from the museum. “Many of these workers spend the holiday alone, so the upcoming event is dedicated to them.”


They will learn about hanbok (Korean traditional clothes), traditional manners and how to make songpyeon (stuffed rice cakes).
Some 40 diplomats from 23 countries including Nepal, Hungary and Kenya are also participating in the event, scheduled for Saturday from 10 a.m. to 2 p.m. Foreigners visiting that day can also register for the event.
Located less than an hour from Seoul, the Korean Folk Village in Yongin, Gyeonggi, offers classes on making your own injeolmi, rice cake covered with bean flour, songpyeon and pottery.
You can even dress up as a character from an historic TV drama and ride in a palanquin.
Sporty people will like learning jaegichagi, a shuttlecock game played with the feet, and tuho, a game of throwing sticks into a barrel.
Archery displays, horseback riding and a tightrope dance plus lessons for kids on rice farming, tools and harvesting will be featured, too.
“Chuseok is all about looking back on traditional customs and manners,” said Kim Won-gyum from the Korean Folk Village. Visitors can participate in some 70 percent of the event’s programs.
The National Museum of Korea in Yongsan, central Seoul, offers a more modern celebration, though it also stages traditional performances like tightrope walking.
There are screenings of family films such as “Superstar Mr. Gam” (2004), “Ratatouille” (2007) and the classic animation, “Robot Taekwon V” (1984), at the museum’s open square.
Outdoor events are planned for palaces in Seoul, including
Gyeongbok, Changdeok and Deoksu.